US hits Takata with massive fine over airbag scandal | Business | Economy and finance news from a German perspective | DW | 20.02.2015

US hits Takata with massive fine over airbag scandal

The US government has said the Tokyo-based airbag maker will have to pay a five-figure fine for each day it fails to "fully cooperate" with an investigation into its potentially deadly inflators. 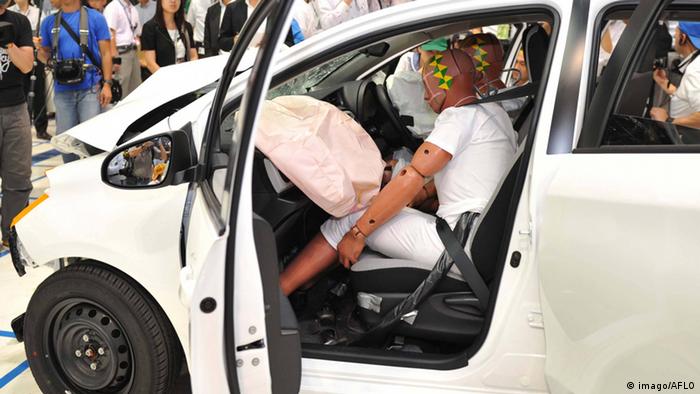 Japanese airbag maker Takata was hit with a $14,000-per-day (12,300 euros) fine by the US government for stonewalling a long-running investigation into the company's faulty and potentially lethal airbag inflators, US Transportation Secretary Anthony Foxx announced on Friday.

"Safety is a shared responsibility, and Takata's failure to fully cooperate with our investigation is unacceptable and will not be tolerated."

At least six deaths and 64 injuries worldwide have been blamed on Takata inflators, which the NHTSA has said can blow up, if exposed to prolonged moisture in the air, spewing shrapnel into drivers and passengers. The airbag parts are used by 10 of some the some of the world's biggest carmakers including BMW, Ford and Honda.

So far, the issue has forced automakers to recall nearly 40 million vehicles globally, with the US topping that list with some 15 million cars, mostly in high-humidity areas such as the Gulf coast, Hawaii, American Samoa and the Virgin Islands. But as many as 30 million potentially deadly airbags could still be roaming US roads.

The NHTSA is accusing Takata of obstructionism as the Tokyo-based company has consistently resisted demands to issue a US-wide recall of its driver's side air bags.

Addressing a US Congress subcommittee hearing last December, Takata Senior Vice President Hiroshi Shimizu told Washington lawmakers that there was "not enough scientific evidence" to change from a regional recall to a national recall.

"Ongoing tests have not shown any ruptures in inflators retrieved from vehicles outside the areas of high absolute humidity," he said.

The transportation agency has also repeatedly demanded data from the company, adding in a letter that Takata had failed to explain the "deluge" - 2.4 million pages - of documents that were turned over. US regulations require companies to explain documents that are not self-explanatory.

"Takata is neither being forthcoming with the information that it is legally obligated to supply, nor is it being cooperative in aiding NHTSA's ongoing investigation of a potentially serious safety defect," NHTSA chief counsel O. Kevin Vincent said in a letter to the firm.

Unless Takata complied, the letter warned, the agency would be taking depositions of the airbag maker's employees in the US and Japan. Vincent also threatened to refer the case to the Justice Department for further court action.

Toyota has announced an expansion of global recalls over faulty and potentially dangerous airbags made by Takata. US regulators had ratcheted up pressure on the embattled auto parts maker. (27.11.2014)