Russia is planning operations to frame Kyiv as the aggressor in any upcoming conflict, a US official said. One expert told DW a false flag attack is not far-fetched, though Moscow has denied it intends to invade Ukraine. 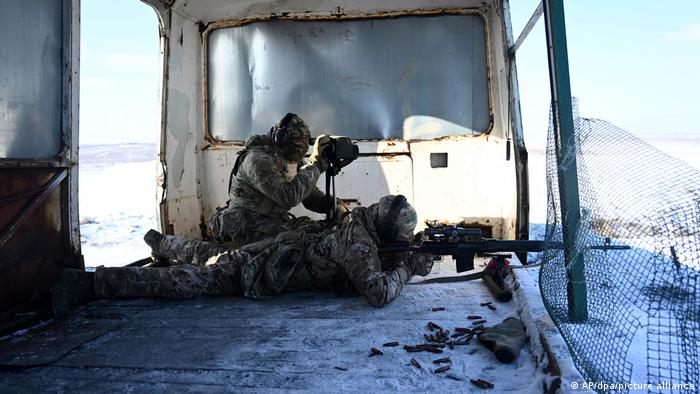 Troops have conducted live-fire exercises near the Ukrainian border, but have no plans to invade, Moscow said

Psaki said that, according to US intelligence, Russian operatives were already in position and that Moscow started conducting a social media disinformation campaign.

The aim is to frame Kyiv as the aggressor to justify a Russian invasion of Ukraine, the press secretary added.

"We are concerned that the Russian government is preparing for an invasion in Ukraine that may result in widespread human rights violations and war crimes should diplomacy fail to meet their objectives,'' Psaki said.

Some 100,000 Russian soldiers have amassed near Ukraine's eastern border, a region where pro-Russian separatists have been fighting the central government since 2014 when Moscow annexed Ukraine's Crimean peninsula.

He also pointed out that similar tactics had been used before the Russian invasion of Crimea, by fomenting a narrative of ethnic Russians in Ukraine being targeted by ultra-nationalist extremists with US support.

This time, US intelligence has noted how Russian influencers on social media have been emphasizing human rights abuses in Ukraine and blaming the West for increased tensions, the Associated Press reported.

Week of talks fails to ease tensions over Ukraine

Andras Racz, a senior fellow on the German Council on Foreign Relations' Security and Defense program, told DW he considered the possibility of a false flag operation a real possibility.

"Using false flag operations as a tool and as a pretext of warfare would indeed not be alien from the Russian practices of waging war," Racz said.

Tensions between Russia and Ukraine were further stoked on Friday after several Ukrainian government websites were hacked. Ukrainian officials have said it is still too early to say who was behind the hacks, but also pointed out Russia had a history of engaging in cyberattacks in Ukraine.

"We are in touch with the Ukrainians and have offered our support as Ukraine investigates the impact and nature and recovers from the incidents. We don't have an attribution at this time," a White House Security Council spokesperson said.

Attempts to mitigate the tensions through direct dialogue between Western and Russian diplomats this week were unsuccessful.

Saying that the standoff with Russia is "more serious than anything we've seen in recent years," Austrian Foreign Minister Alexander Schallenberg expressed concern that diplomatic failures would not always end in cyberattacks.

"Some say the cyberattack could be the prelude for other activities, military activities," he said.

German Defense Minister Christine Lambrecht on Friday warned Moscow of consequences should it invade Ukraine, but stressed that: "We must exhaust all options to resolve this conflict."

The sentiment was mirrored by other EU foreign ministers meeting in the French city of Brest on Friday.

"The European Union is certainly ready to respond directly to any aggression but our preference ... is that of dialogue and negotiations," EU foreign policy Josep Borrell said.

German Foreign Minister Annalena Baerbock will have a chance to deliver the EU's view of ongoing tension during visits to both Kyiv and Moscow next week.

But after three days of intense meetings with the United States, NATO and the Organization for Security and Co-Operation in Europe, the White House said it was time for the Kremlin to choose whether to pursue more talks.

"If they decide they want to engage in diplomatic conversations and talks, we are very open to that and we're hopeful they will do that. But ultimately, it's a choice they need to make," White House Press Secretary Psaki said.

Still a chance for negotiations?

However, foreign relations specialist Racz said he was "not optimistic at all about whether there is still room for diplomacy" and questioned the seriousness of the diplomatic efforts from Moscow.

"The Russian proposal [for security guarantees from NATO], which Moscow intended to serve as a guideline for this week's negotiations, were clearly a non-starter both for NATO and for the US," Racz told DW. "And Russia has been aware of that since the very beginning."

DW's Chief International Affairs Editor Richard Walker said it will be difficult to find a solution in light of the Kremlin's demands over Ukraine.

"For Vladimir Putin to make these demands public and then to walk back from them without losing face, is going to be difficult," Walker said. "That's going to be the art of diplomacy in the weeks ahead for the West, to try and persuade him to do exactly that."

US, allies 'prepared for any contingency': US national security adviser