The United States is struggling to contain a recent uptick in cases in Florida, Arizona and Texas. The EU is mulling whether to allow US citizens to enter the bloc as it nears a full reopening next month. 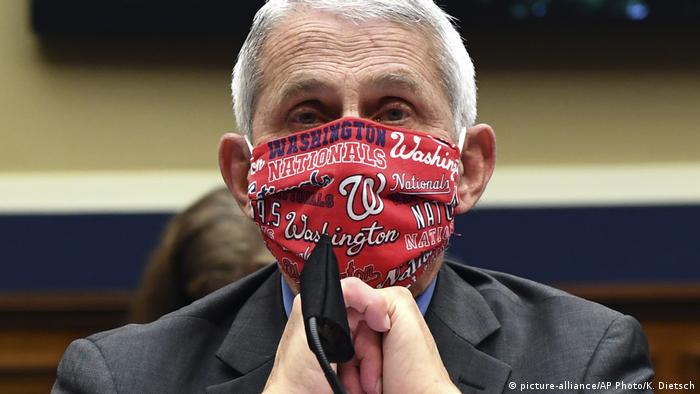 The United States is facing a crucial period as it continues to grapple with the coronavirus, while the European Union on Tuesday threatened to bar US citizens from entering the bloc due to the increasing number of cases stateside.

Top immunologist Dr. Anthony Fauci admitted the US has "been hit badly," as cases in Florida, Arizona and Texas continued to surge. He said he was "really quite concerned" about rising community spread in some states, while adding "the next couple of weeks are going to be critical in our ability to address those surges."

Read more: Holiday in Germany during COVID-19: What travelers need to know

Fauci and other senior health officials also said they have not been asked to ease up on testing for COVID-19 following President Donald Trump's comments on conducting fewer tests due to the many positive results. "We will be doing more testing," Fauci, the US government's top immunologist, told a House committee.

The US has tested more than 27 million people, with some 2.3 million infections uncovered, and more than 120,000 coronavirus-related deaths.

Fauci also pleaded with citizens to avoid large gatherings and to wear face masks when around others to try to curb the recent upsurge in cases, while Trump continues to shun the usage of such protection and hold rallies.

"If you do, please wear a mask," Fauci said, adding that this applied to both political rallies and demonstrations.

Meanwhile, a number of EU countries have expressed concern over opening their borders to US citizens as they cast doubt over President Trump's crisis management.

Countries across the bloc are easing border restrictions and planning to open up to tourists from third nations. Those plans, however, do not include US citizens due to the country's handling of the pandemic, the New York Times reported on Tuesday, citing draft lists of acceptable travelers.

The US, which has the most COVID-19 cases in the world, is seeing a new spike in infections. According to the proposal, US travelers would be grouped in with those from Brazil and Russia, who rank second and third globally in terms of the number of infections, and would not be allowed to visit the continent's member states.

At the beginning of March, when cases were rising in Europe, Trump banned EU citizens from entering the US. The bloc is likely to announce next week a continuation of its ban on Americans entering, while it opens up to travelers from outside the EU on July 1.

Earlier this month, EU Home Affairs Commissioner Ylva Johansson said the list of countries that would allow visitors would be based on three criteria: countries should at minimum have COVID-19 under as much control as the EU average, have containment measures during travel, and should also be willing to allow EU visitors entry.