US expels Russian officials after attack on diplomat in Moscow

The US has expelled two Russian officials in response to an attack on an American diplomat in Moscow last month. It's not the first time allegations about the treatment of US diplomats have surfaced. 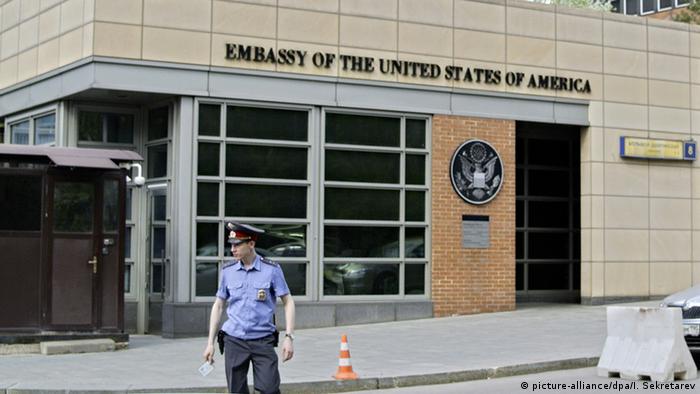 The State Department said it had taken the step after a Russian policeman assaulted an accredited diplomat outside the US embassy compound in Moscow.

As part of NATO's strengthened defenses in eastern Europe, the US has announced that it will deploy soldiers and a separate brigade headquarters to Poland. The Alliance is currently meeting in Warsaw. (08.07.2016)

"The action was unprovoked and it endangered the safety of our employee," department spokesman John Kirby told reporters at a briefing on Friday.

The Russian Foreign Ministry had a different version of the confrontation. It said the American was a CIA agent who refused to show his identification documents and hit the Federal Security Service guard in the face.

"Instead of the CIA employee, who was in disguise, as we understand, it could have been anyone - a terrorist, an extremist, a suicide bomber," Russian Foreign Ministry spokeswoman Maria Zakharova told state-owned NTV television.

Kirby disputed the statements, saying "the Russian claim that the policeman was protecting the embassy from an unidentified individual is simply untrue."

The alleged attack in Moscow took place on June 6. Two Russian officials based in the US were expelled on June 17, Kirby said.

Earlier this week, Russian state television broadcast what appeared to be video footage of the scuffle. In the short clip, a man seen leaving a taxi is almost immediately tackled to the ground by a guard who bursts out of a sentry box and pins him to the ground. The man then crawls through the doors of the embassy building.

The incident is the latest in a string of complaints about the ill-treatment of American diplomats and their families in the Russian capital. In a Washington Post report last month, some diplomats said they had been followed, and that intruders had broken into their homes at night to rearrange furniture, turn on lights and even defecate on a living room carpet. Officials also told the newspaper that Russian intelligence officers once broke into the US defense attache's Moscow house and killed his dog.

Kirby said Russian security services had "intensified their harassment against US personnel in an effort to disrupt our diplomatic and consular operations."

Moscow denies the charge, and has also accused the US of harassing its own diplomats.

Relations between the Washington and Moscow are already strained over Russia's 2014 annexation of Ukraine's region of Crimea and its support of separatist rebels in eastern Ukraine.