US ex-presidential hopeful Perry turns himself in on felony counts

Texas Governor Rick Perry has turned himself in to answer to two felony counts of abuse of power. The one-time Republican presidential contender claims the charges are politically motivated and vowed he would fight. 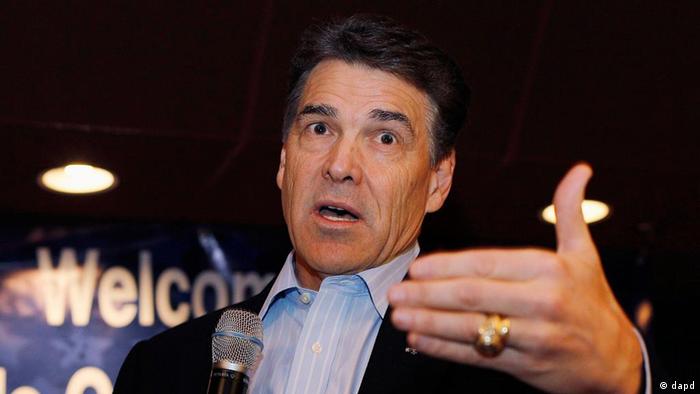 Texas Governor Rick Perry arrived at an Austin courthouse on Tuesday to be booked on two counts after being indicted by a grand jury last week.

Perry, who unsuccessfully fought for the Republican nomination to be presidential candidate in 2012, is accused of coercion and official oppression. The 64-year-old, who has also been seen as a contender for the 2016 presidential race, had publicly threatened to veto $7.5 million (5.6 million euros) in funding for the state public integrity unit, which investigates alleged misdeeds of public officials.

The governor spent some 15 minutes being booked in a process that included having his mug shot and fingerprints taken.

"The actions that I took were lawful," said Perry, after being processed. "They were legal and they were proper. This indictment is fundamentally a political act that seeks to achieve at the courthouse what could not be achieved at the ballot box."

Perry's veto threat was seen by his political opponents as an attempt to force the resignation of the unit's head, Travis County District Attorney Rosemary Lehmburg, after she pleaded guilty to a drunken driving charge while still in office. Democrats claimed he was using Lehmburg's misdemeanor in an effort to install an ally at the helm of the unit.

The more serious of the felony charges carries a possible prison sentence of between five and 99 years.