As the US pushes for higher climate goals ahead of the COP26 conference, Japan says it is "extremely important" to press China to further reduce its carbon emissions. 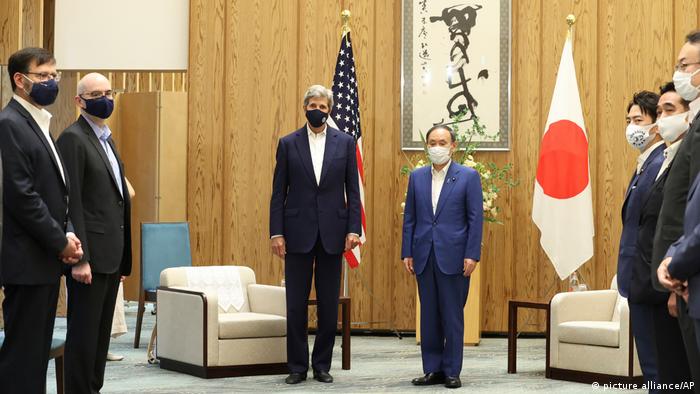 The two countries agreed to continue to work together "to advance the decarbonization of the world," the Japanese government said.

The US push comes ahead of the COP26 United Nations climate conference in November.

Kerry is also due to fly out to China later in the day, where he is expected to pressure officials on carbon emissions .

"China is the world's biggest carbon emitter and the number two economy as well, and it is extremely important that we encourage China to firmly fulfill its responsibility to match its place," Japan's Foreign Minister Toshimitsu Motegi told a press briefing after meeting Kerry.

China and the US are the world's largest and second-biggest carbon emitters. Japan is the fifth.

In April, Japan has doubled its target for emissions cuts by 2030, promising to reduce its carbon emissions by 46% and achieve carbon neutrality by 2050.

Koizumi told Kerry that the months leading up to COP26 are "critically important and we need to intensify our efforts to tackle climate change," according to local media.

China has set a goal to reach carbon neutrality by 2060.

In June, Group of Seven leaders vowed to phase out fossil fuel investments. But climate activists said the G7 pledges did not go far enough and lacked enforcement mechanisms.