At least three road signs pointing to the US embassy have gone up in Jerusalem ahead of its scheduled opening on May 14. President Trump's recognition of the city as Israel's capital has drawn worldwide consternation. 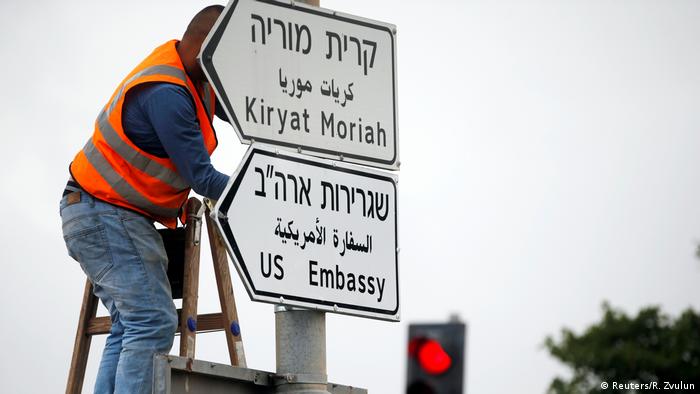 Israeli authorities in Jerusalem on Monday installed at least three road signs pointing to the new US embassy, ahead of the mission's controversial move from Tel Aviv next week.

The signs — which spell out "US Embassy" in English, Hebrew and Arabic — were put up on the southern side of Jerusalem by the US consulate. The building will be repurposed as the US's interim embassy when it officially opens on May 14, coinciding with the 70th anniversary of Israel's declaration of independence.

Jerusalem Mayor Nir Barkat hung the first road sign. In a statement, the mayor said: "This is not a dream, it's reality." Jerusalem is the eternal capital of the Jewish people, and the world is beginning to recognize this fact."

Back in December, US President Donald Trump declared Jerusalem as Israel's capital and announced that the US would relocate its mission from Tel Aviv to the city.

Trump's announcement was largely met with applause inside Israel but otherwise drew global consternation. Palestinians, who see the eastern half of Jerusalem as the capital of their future state, reacted in outrage, while the UN General Assembly voted  to reject the Trump's decision.

"This move is not only illegal but will also thwart the achievement of a just and lasting peace between two sovereign and democratic states on the 1967 borders, Israel and Palestine living side by side in peace and security," Palestinian negotiator Saeb Erekat said in a statement ahead of next week's opening.

Israel annexed the eastern part of the city from Jordan during the 1967, although the international community had refused to recognize it as part of Israel.

Clinging to hope for a peace solution

The US, however, maintains that its recognition of Jerusalem as Israel's capital is merely a recognition of the current situation. The Trump administration has maintained that it remains committed to forging a peace settlement in the region. 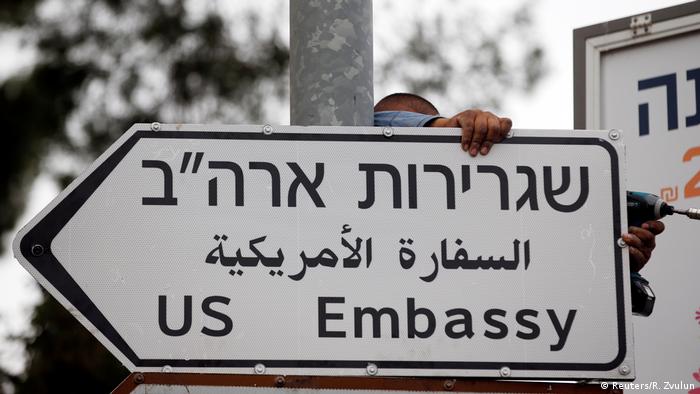 Multilingual signs in Israel often fall victim to vandalism, both by Jews and Arabs.

"As President Trump has said in December, the boundaries of Israeli sovereignty in Jerusalem remain subject to negotiations between the parties, and we remain committed to achieving a lasting and comprehensive peace that offers a brighter future for both Israel and the Palestinians," US Secretary of State Mike Pompeo said during a visit to Israel last week.

However, Israeli police have played down the prospect of the US embassy signs being targeted. "We're not guarding the embassy signs but of course there is upgraded security around the embassy which is already being implemented," an Israeli police spokesman said. "There are also new CCTV cameras that have been set up in the area. The perimeter and all movement in the area are being closely watched."

The interim embassy will house the US ambassador and a small number of staff, while US officials still consider a site for the permanent location.

Turkey's Erdogan voices support for Ukraine amid crisis 26m ago