US embassy in Libya evacuated after heavy violence

The United States has evacuated its embassy staff in Libya due to violence between rival militias in the capital. Secretary of State John Kerry said there was a "very real risk" to US diplomats. 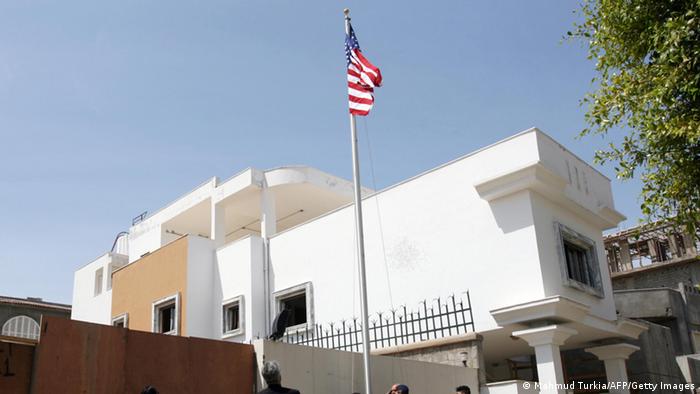 The US embassy staff were evacuated to Tunisia on Saturday under the protection of US military personnel.

"Due to the ongoing violence resulting from clashes between Libyan militias in the immediate vicinity of the US Embassy in Tripoli, we have temporarily relocated all of our personnel out of Libya," State Department spokeswoman Marie Harf said.

The embassy had already been operating with limited staff. The remaining workers were driven overland to Tunisia hours after the Libyan government warned of militia fighting for control over Tripoli airport.

"A lot of violence is around our embassy - but not on the embassy - but nevertheless presents a very real risk to our personnel," Kerry told reporters in Paris.

Tripoli's airport has been the target of 13 days of shelling, which has disrupted air travel outside of the country.

Kerry said the US was "suspending" its operations but not closing its embassy in the Libyan capital.

"We will return the moment the security situation permits us to do so," he said. "But given the situation ... we want to take every precaution to protect our folks."

Harf added that "staff will operate from Washington and other posts in the region."

The US has been particularly wary of the security situation in Libya after the 2012 attack on the US consulate in Bengazhi that killed Ambassador Chris Stevens and three other Americans.

"Securing our facilities and ensuring the safety of our personnel are top department priorities, and we did not make this decision lightly," said Harf. "Security has to come first."

Along with the evacuation, the State Department issued a travel warning, advising Americans not to go to Libya and urging those still in the country to "depart immediately."

"The Libyan government has not been able to adequately build its military and police forces and improve security," it said. "Many military grade weapons remain in the hands of private individuals, including antiaircraft weapons that may be used against civilian aviation."

Saturday's evacuation is the second time in just over three years that the US has shut down its embassy in Libya. In February 2011, the embassy suspended operations during the NATO-assisted uprising that eventually toppled longtime leader Moammar Gadhafi. It was reopened in September of that year, a month before Gadhafi was killed.

Relative calm has returned to the area surrounding Libya’s main airport after clashes. Heavy fighting had erupted among rival militias around the main airport, about 30 kilometers south of the Libyan capital, Tripoli. (13.07.2014)