US campaign finance: The expensive road to the White House | Americas| North and South American news impacting on Europe | DW | 30.10.2020

US campaign finance: The expensive road to the White House

Running for president doesn't come cheap in the US. Candidates have to raise hundreds of millions of dollars to fund ads and travel. But support doesn't just come from individual voters. 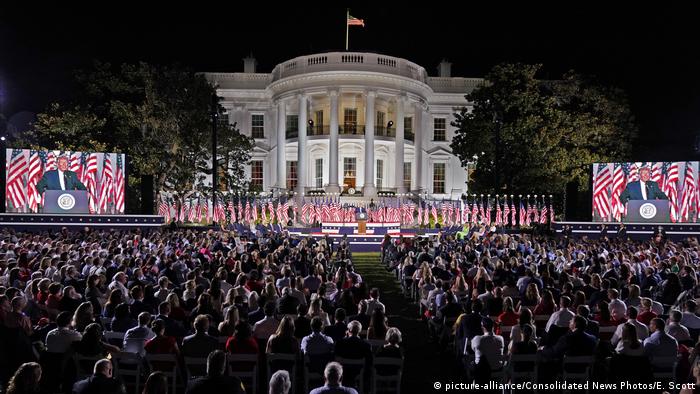 In 1895, Mark Hanna, a senator from Ohio, uttered these pithy lines about US politics.

"There are two things that are important in politics. The first is money, and I can't remember what the second one is."

That's as true today as it was 125 years ago — maybe even more so. As a political candidate in the US, you don't get anywhere, especially not to the White House, without millions and millions of dollars in your coffers. During the current US election campaign, presidential candidates from both sides have already raised a record $3.7 billion (€3.2 billion) and spent $3.5 billion, according to the Federal Election Commission (FEC), an independent regulatory agency in charge of enforcing campaign finance law.

The $3.7 billion raised so far don't just include the campaigns of US President Donald Trump and former Democratic Vice President Joe Biden.

"That's everyone who was running for president," FEC Commissioner Ellen Weintraub explained in an online press briefing. "And there was a robust primary process, at least on the Democratic side."

With a large number of Democratic candidates like Bernie Sanders, Elizabeth Warren and Biden's eventual running mate Kamala Harris staying in the primary race for a relatively long time and each encouraging their supporters to donate to their campaigns, it's no wonder donations have sky-rocketed this election cycle. 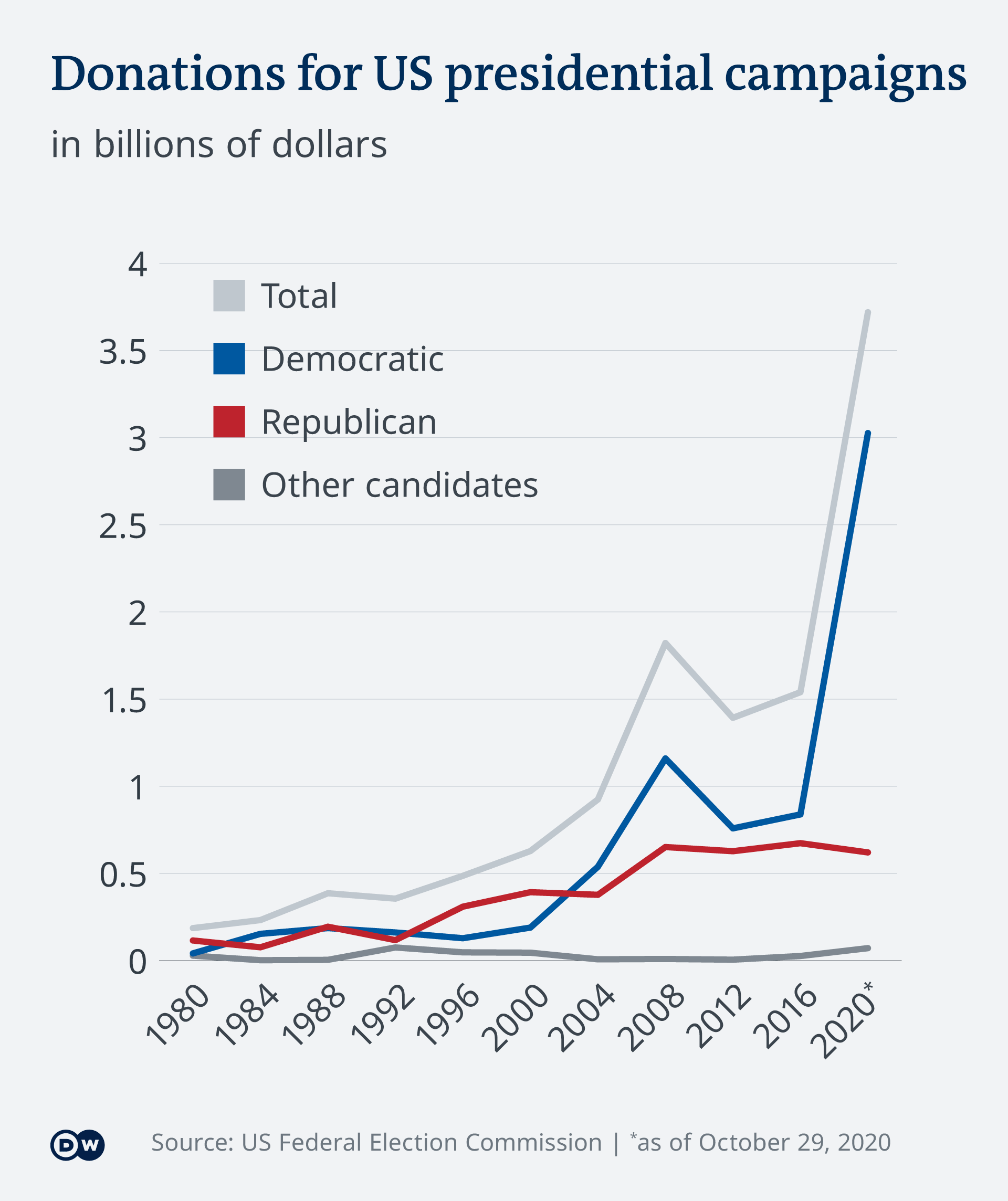 Lots of enthusiasm among small-time donors

Those numbers are especially stunning considering that they come from a plethora of donors. The highest amount an individual or an organization can donate directly to a presidential candidate is $2,800. Only Americans can donate; candidates mustn't accept money from foreign sources.

Small-time donors played a big role in this election cycle for all candidates.

At the time of the press briefing last week, $3.5 billion had been raised by presidential candidates so far this cycle. Out of that sum, almost $1.3 billion were from contributions of $200 or less.

'People have more time to focus on politics' during pandemic

Many Americans have lost their jobs during the coronavirus pandemic, face eviction or saw a spike in medical expenses. But this didn't result in an overall tightening of purse strings. Record donations during a severe economic downturn might sound counter-intuitive at first. But campaign finance expert Weintraub said there may be a reason why people are still contributing to the Trump or Biden cause, even though times are rough for many.

Read more: Trump and the economy: What can he take credit for?

"I wonder whether the fact that a lot of people are sitting at home staring at their screens all day long and maybe consuming a lot of information is getting them riled up about politics and making them think 'Oh, I'm going to send 25 bucks to my favorite candidate. I want to make a difference in this race,'" the FEC commissioner said. "People have more free time to focus on politics, and that may be a factor in the increased donations."

Another factor that has led to an increase in the number of small-time donors is the fact that it's now easier than ever to contribute to a political campaign.

"It used to be people would have to write out a check and put it in the mail and find a stamp, and now a lot of fundraising goes on online," Weintraub said in the online briefing. "Before I think a lot of people would have thought 'Oh, it's not worth the trouble to write a check for $3.' Now campaigns are constantly sending people emails and texts and links in order to have them donate funds in relatively small amounts, and it's easy to do." 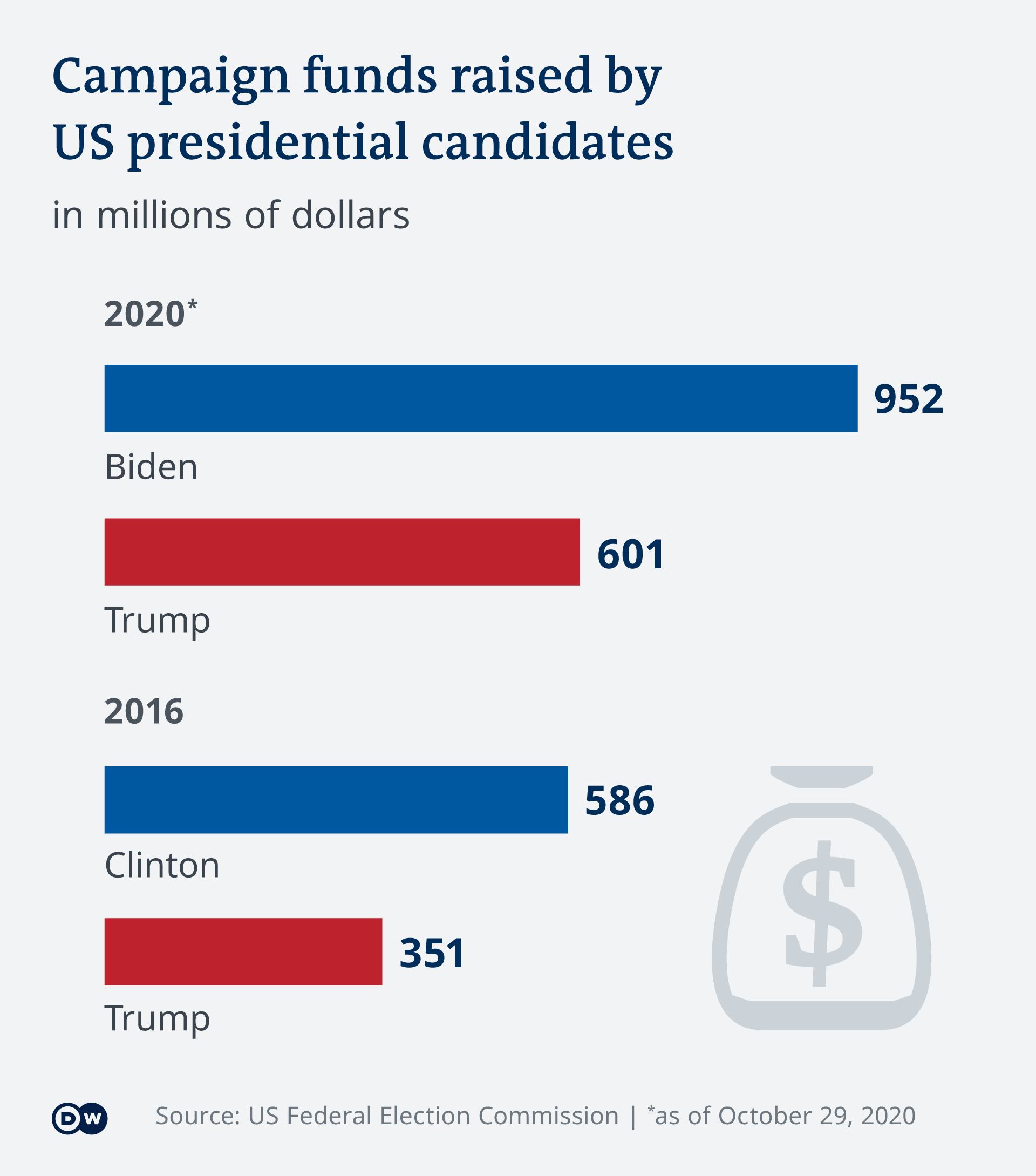 But why is it so expensive to run for president in the US?

First of all, it's a long road to the White House. Unlike countries that legally restrict campaigning to a short time before the election like Germany, for example, the US has no rules on when prospective candidates can start appealing to potential voters. That means a primary contender's campaign gets started at least a year-and-a-half before election day — and funding 18 or more months of campaigning takes a lot of money.

And then there's the sheer size of the US. Normally, candidates criss-cross the 50 states campaigning in town halls in Maine to factory visits in Texas, and major candidates will have an office in each state run by staff that need to be paid.

During the coronavirus pandemic, travel has been slightly less of a factor, so TV ads are even more important. A lot of money goes into campaign advertisements praising the candidate's virtues or denouncing his opponent's vices. In addition to national ads, candidates also spend money on messages tailored to address specific voters in certain states.

No restrictions for Super PACs

But ads funded by each candidate's campaign donations are not the only ones Americans see on TV in the runup to the elections. Independent expenditure-only political action committees, or Super PACs, are groups that support a certain candidate or political initiative by basically campaigning for them — for example by producing TV ads. The crucial difference in funding between a Super PAC and the candidate's own campaign: There is no limit on how much money a donor can pour into a Super PAC.

The rules on how much a candidate's campaign can accept in donations are supposed to prevent situations where donors might try to "buy" a candidate and expect favorable decisions from him or her. But independent political action committees, the Supreme Court decided, aren't facing this risk of corruption. That's why the rules on what kind of donations are acceptable don't apply to them.

The Supreme Court has also ruled that there can be no limit on how much money in total Super PACs can spendin support of their preferred candidate, since that would violate the freedom of speech granted in the First Amendment to the constitution. This right to political spending as a form of free speech does not just extend to individuals, the justices ruled in the contentious landmark case Citizens United versus Federal Election Commission in 2010.

"Super PACs can take money from corporations and labor organizations, which candidates and party committees cannot," Weintraub said. "And there are no contribution limits or spending limits for Super PACs. I'll just say I don't really agree with that Supreme Court doctrine. But I'm not a Supreme Court justice. I am merely a humble election commissioner."

The US president diverted funds donated by veterans to his personal charity to support his 2016 election campaign. He used the money, among other things, to pay for a 1.8-meter-high portrait of himself.

One of Barack Obama's favorite rappers has been charged with illegally financing his re-election campaign. He has also been tied to Malaysia's sprawling 1MDB embezzlement scandal.