After a gap of over 50 years, regular air services between the US and Cuba are resuming, underscoring the mending of ties between the two erstwhile Cold War foes. But many issues remain unresolved. 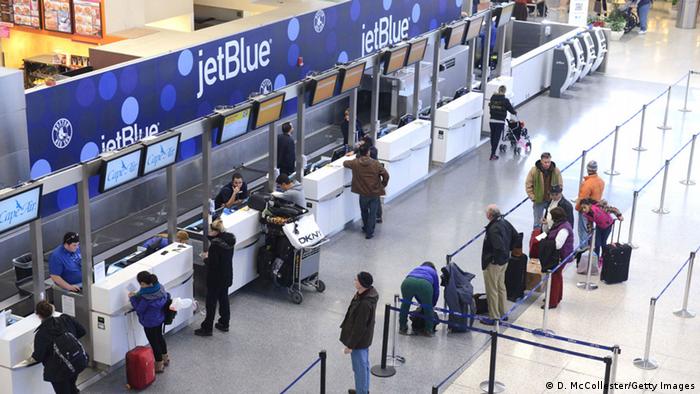 The year 1961 witnessed a number of historical events, including the start of the construction of the Berlin Wall and Yuri Gagarin's first human space flight. But it was also the last time there was a direct scheduled flight between the US and Cuba.

And more than half a century later, regular air services between the two former Cold War rivals resumed on Wednesday, with an Airbus A-320 belonging to the US carrier JetBlue Airways making the inaugural flight between Fort Lauderdale, Florida and the central Cuban city of Santa Clara.

Coinciding with this event is the Cuban trip of US Transportation Secretary Anthony Foxx, who will be in Havana this week to hold talks with his counterpart Adel Yzquierdo and Foreign Minister Bruno Rodríguez. Foxx is expected to be on the flight, according to a Twitter post from his office.

"The revival of regular direct flights is a positive step and a contribution to the process of improving relations between the two countries," Rodriguez said.

Both sides have made efforts to deepen the bilateral partnership since December 2014, when US President Barack Obama announced that America was resuming diplomatic ties with Cuba after more than 50 years of deep-freeze. Diplomatic relations were restored in July 2015.

Giselle Cortes, JetBlue's director of international airports, said her company was "proud" of the fact that it's the airline to operate the first direct flight. Cortes thanked the Cuban authorities for their "excellent" cooperation, particularly the staff of the airport in Santa Clara.

She also expressed satisfaction with regard to the security arrangements at Cuban airports. "All international standards are met," she noted, pointing out this was also confirmed by the US Transportation Security Administration (TSA).

JetBlue aims to become the "preferred US airline for travel to Cuba," Cortes said.

The price of a one-way flight between Fort Lauderdale and Santa Clara amounted to $99 (89 euros), she said, adding that a round trip would cost about $210, including taxes and insurance. The rates are a lot cheaper than those of the charter flights, which are estimated to charge over $400 for a round trip.

The growing number of tourists trooping into the Caribbean Island requires more quantity of beer drink to enjoy their stay on the Island. (10.06.2016)

First US cruise landed in Cuba

The ubiquitous fridges that dispense beer in Cuba's bars, cafes and gas stations are running out, as a surge in American tourists and new private watering holes strain the main brewery. (11.04.2016)

A Cuban president has received his US counterpart on Cuban soil for the first time in nearly 90 years. Despite diplomatic differences, Cuban President Raul Castro and Barack Obama hailed a "new day" in relations. (21.03.2016)

In 1979, both Washington and Havana authorized charter flights, largely humanitarian in nature, to transport Cubans residing in the United States and limited categories of American travelers. Barring a brief period in the 1980s, the charter flights have continued to operate. According to official figures, there were 4,783 charter flights in 2015 and 3,452 in the first six months of this year.

Since the US government eased travel restrictions to the Caribbean island nation, the number of Americans visiting the country has seen a jump. Washington, however, continues to bar US citizens from traveling to Cuba for tourist activities. Travel is allowed only when it falls under one of the 12 categories approved by the US government.

These lingering restrictions also pose significant challenges to the US airlines operating flights to Cuba. And the purchase of the flight tickets is handled by the Florida-based Stonegate Bank, which is currently the only bank to conduct financial transactions between the US and Cuba.

Meanwhile, JetBlue says it's working with the Cuban authorities on a mechanism that will facilitate the purchase of tickets in Cuba. The tickets can so far be bought only at the airport in Santa Clara.

In total, the restored scheduled air service will comprise of 110 daily round trips, with 90 already authorized by both governments to nine Cuban airports, many of them in or near tourism hotspots.

They will be permitted to operate flights from airports in Miami, Fort Lauderdale, Chicago, Minneapolis-St. Paul and Philadelphia.

The capital's left out

But JetBlue executive Cortes hopes the airline will be able to start a service to the Cuban capital city by the end of the year. Transport Secretary Foxx could also announce something new in this regard on Wednesday. 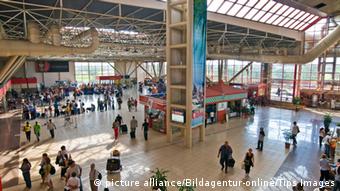 The Cuban government recently announced the privatization of Havana's airport

Concerns abound about the quality and capacity of Havana's airport, which is already bursting at the seams. Earlier this month, the Cuban government announced its privatization. It roped in the French corporations Bouygues Batiment International and Aéroports de Paris to renovate and manage the capital's José Martí International Airport.

Another open question relates to whether or not the Cuban national airline, Cubana, will be able to service US cities, against the backdrop of demands and court rulings in the US regarding damage payments for the losses incurred on account of Cuba's nationalization program following its revolution in the 1950s.

That's why there are legitimate fears that Cuban aircraft could be confiscated should they fly to US airports. "We do not anticipate Cuban-owned aircraft will fly to the US in the near future," said a US transport ministry spokesperson in February. And little has changed on this front since then. In this context, a completely normalized commercial flight service between the two countries is still a long way off. The Fort Lauderdale-Santa Clara flight is just the beginning.

First US cruise ship in decades docks in Cuba

German old people's homes stopped allowing visitors in on government orders early this year. Now, better equipment and more experience means residents will be allowed visitors throughout the second wave of the pandemic.