Mokhtar Belmokhtar, the veteran Islamist militant behind the Algerian gas field attack in 2013, has been reported killed in Libya. The US has confirmed he was the target of airstrikes at the weekend. 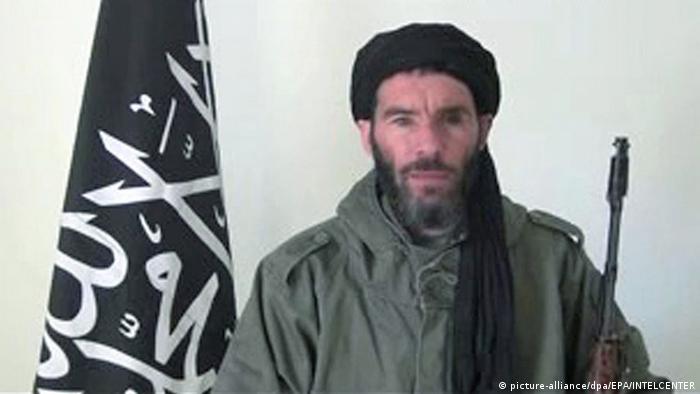 Belmokhtar has been reported killed several times, including in 2013 when he was believed to have died in Mali.

The US military confirmed Belmokhtar had been targeted in the air strike on Saturday night, but did not say if he had been killed.

"I can confirm that the target of last night's counterterrorism strike in Libya was Mokhtar Belmokhtar," Pentagon spokesman Colonel Steve Warren said in a statement on Sunday.

"The strike was carried out by US aircraft," Warren added. "We are continuing to assess the results of the operation and will provide more details as appropriate."

Libya's internationally recognized government said: "The Libyan government in the east of Libya confirms that US fighter jets conducted air strikes last night in a mission which resulted in the death of the terrorist Belmokhtar."

Libyan officials offered no further details about the area of the strike. But before the US statement, Libyan military sources said an air strike on Saturday in Ajdabiya city near Benghazi had killed seven members of the Ansar al Sharia militant group.

Officials confirmed that American surveillance drones had been part of the effort to track Belmokhtar.

If confirmed, Belmokhtar's death would be a major strike against al Qaeda linked groups in the region. Belmokhtar was the leader of the north African Al-Murabitoun militant group and a former chief of al Qaeda in the Islamic Maghreb (AQIM).

The one-eyed fighter was born in Algeria in 1972. He played a major role in smuggling across the Sahara, hostage-taking, arms trafficking and insurgencies. He learned combat skills fighting the Soviet-backed government in Afghanistan.

Belmokhtar was most known for the 2013 attack on an Algerian gas plant: "Belmokhtar directed the 2013 attacks at In-Amenas in Algeria that resulted in the deaths of at least 38 individuals from 10 countries, including three Americans, and poses a continuing threat to US persons" Pentagon spokesman Warren detailed in his statement.

The strike by US aircraft was the first in Libya since the 2011 overthrow of Moammar Gadhafi. American commandos have carried out other operations in Libya since the NATO-directed air war. In October 2013 US forces captured a Libyan militant who had been indicted in 2000 for his role in the 1998 bombings of the US embassies in Kenya and Tanzania. Last year commandos tracked down the man suspected of leading the 2012 attack on the US Mission in Benghazi.