Police vastly outnumbered pro-Trump protesters at a rally in support of those charged for breaching the US Capitol in January. Security had been tightened amid concerns of a repeat of violence. 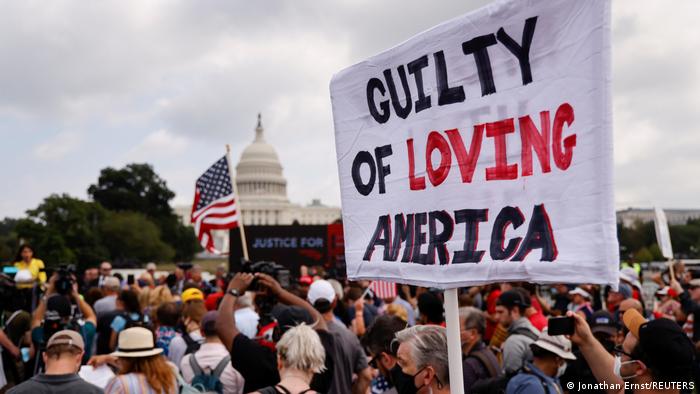 A few hundred protesters gathered in Washington DC on Saturday in support of those charged over the deadly US Capital riots in January.

The turnout at the "Justice for J6" rally was far from the 700 people expected.

Chants of "Let them go!" rose from the protesters as speakers took to the podium to decry what they called the Biden administration's detention of "political prisoners."

More than 600 people have been charged for their part in the riots.

Many of Saturday's protesters carried flags of the far-right Three Percenters anti-government militia.

Security was stepped up around the US Capitol to avoid a repeat of the deadly riot from earlier this year.

The fence that had surrounded the building that houses the US Congress was re-erected and 100 National Guard troops were placed on standby, armed with batons.

The protest was organized by Matt Braynard who had been a campaign strategist for former President Donald Trump.

He has been promoting Justice for J6 for supporters of the US former leader who are still behind bars for their role in the January 6 riot.

On that day, thousands of Trump supporters ran amok at the US Capitol in a bid to disrupt the confirmation of President Joe Biden's victory.

Lawmakers were forced into hiding as protesters breached security.

In the chaos, five people were killed and many more were injured. A number of those who were arrested have been identified as being involved with extremist groups.

Shocking photos of the violent riot at US Capitol