US blames EU for Turkey′s eastward shift | World| Breaking news and perspectives from around the globe | DW | 11.06.2010

US Defense Secretary Robert Gates stirred the ire of both the European Union and Turkey when he suggested that Turkey was moving east because it was being shut out from the EU. Critics say there is some truth to it. 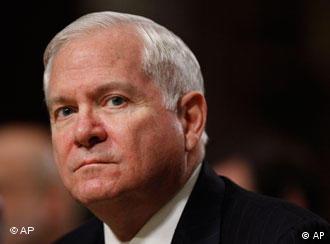 Robert Gates threw the cat amongst the pigeons in London

Speaking at a United Nations conference in London recently, US Defense Secretary Robert Gates triggered a row over Turkey's tortuous links with the European Union.

Addressing a fear that the EU was driving away a valuable ally in the Middle East, Gates said, "If there is anything to the notion that Turkey is, if you will, moving eastward, it is my view in no small part because it was pushed and pushed by some in Europe, refusing to give Turkey the kind of organic link to the West that Turkey sought."

The remarks came as the United Nations Security Council voted 12-2 to impose additional sanctions on Iran. The two dissenting votes came from Turkey and Brazil, who riled the West last month by brokering a new agreement with Iran.

The deal, similar to the one offered to Iran back in October, called for Tehran to send part of its enriched uranium to Turkey in return for higher enriched uranium from Western countries to be used in a medical research reactor. This, many western critics said, was too little too late, and the Security Council has now consolidated its policy of economic sanctions.

A matter of honor

Turkish Prime Minister Recep Tayyip Erdogan told a meeting of the Turkish-Arab Cooperation Forum (TAC) that the no vote had been a matter of honor. "If we had not said 'no' to sanctions, we would have denied ourselves. It would be a dishonor. We would not want to participate in such a dishonor, because history will not forgive us," Erdogan said.

But Erdogan was also quick to rebuff Gates' statements. "Those who say that Turkey has broken away from the West are the intermediaries of an ill-intentioned propaganda," the prime minister said.

The European Commission also rejected Gates's accusations and attempted to separate Turkey's recent diplomatic self-assertion - in particular its heavy row with Israel over the Turkish activists killed accompanying a relief-flotilla to Gaza - from the issue of EU accession.

But Italian Foreign Minister Franco Frattini said there was some truth in it. "I think that we Europeans have made a mistake in pushing Turkey eastward instead of bringing them towards us," Frattini told Germany's Frankfurter Allgemeine daily in an interview.

"If we give Turkey the impression that we don't want them as a member of the European Union family then they will have a look around for other perspectives," for example regional powers like Iran and Syria, he added.

Despite Erdogan's denials, there is evidence that Ankara is attempting to deepen its ties with the Middle East. Erdogan recently announced that Turkey intended to form a free trade and visa-free travel zone with Jordan, Lebanon and Syria, and since Erdogan's AK Party came to power in 2002, Turkish exports to its Muslim neighbors have increased sharply.

Nevertheless, Erdogan went on to stress that the proposed trade bloc with Lebanon and Syria must not be seen as an alternative to the EU, and that Turkey was continuing with reforms to meet the EU's accession requirements.

"Gates's remarks are a measure of the US frustration with Turkey's foreign policy, and the way it is departing from its traditional western alliances," he told Deutsche Welle. "The US always saw Europe as an anchor for Turkey."

Hakura also believes that Gates's comments were at least partly justified. "There is a measure of accuracy in his remarks," he said. "If you look at how Turkey's foreign policy went when it was on good terms with the EU and the accession process was going well, you'd see that Turkey's foreign policy closely followed the EU's - for example in relation to Syria. The US really wants the EU to facilitate Turkey's accession."

The Obama administration places a lot of value in Turkey's position straddling Europe and Asia and the Christian and Muslim worlds, displayed by Turkey's membership of both NATO and the Organization of the Islamic Conference.

Pressure from the US on the EU has been made apparent before, most clearly when Obama addressed the Turkish parliament in April 2009. "Europe gains by diversity of ethnicity, tradition and faith - it is not diminished by it," he said to applause from the Turkish delegates. "And Turkish membership would broaden and strengthen Europe's foundation once more."

This caused anger among right-wing European parties, notably in Germany, where members of the Christian Social Union complained that Obama was meddling in EU affairs.

Formal talks on Turkey's EU membership started in 2005, but they have moved at a glacial pace due to a lack of reform in Turkey, the problem of Turkey's presence in Cyprus, and more general objections, mainly from France and Germany. Insisting on what they believe are immutable cultural differences, many politicians have suggested that Turkey be offered some kind of "privileged partnership" rather than full membership.

Ruprecht Polenz, member of the German parliament and Chairman of the Bundestag Foreign Affairs Committee, recently published a book called "Better for both: Turkey belongs in the EU."

He told Deutsche Welle about German prejudices towards Turkey: "Apart from the historical fear of the Turks, we also have, since 9/11, a very specific idea of what Islam means in Germany. I have been dealing with this question for 15 years, and have been trying to explain that this specific idea of Islam does not exist."

But Polenz acknowledged that Turkey still had important domestic reforms to undertake - particularly in the relationship between the state, the individual and religion. "The form by which Turkey practises Islam as a state religion cannot be squared with our notion of religious freedom."

Nevertheless, it is becoming increasingly clear that continued resistance in the EU will have consequences well beyond Europe.

Iraqi Kurdish leader Massoud Barzani is in the middle of his first official visit to Ankara as Kurdistan president. The trip represents a major step in Turkey's relationship with Kurds on both sides of the border. (03.06.2010)