US planes have begun transporting French troops and equipment to Mali. Meanwhile, French and Malian troops have taken two towns, Diabaly and Douentza, in their fight to push back Islamist rebels. 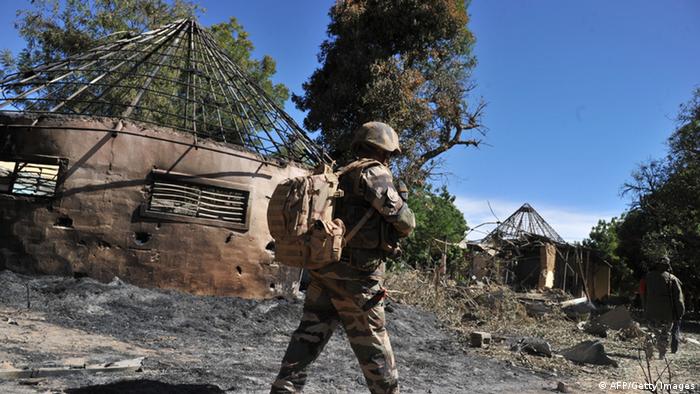 The Air Force has begun transporting French troops and equipment in support of the mission in Mali, Tom Saunders, a spokesman for US Africa Command in Stuttgart, Germany, said. He said two flights arrived in Bamako on Monday and a third arrived Tuesday morning.

Saunders said the missions are scheduled to operate over the next several days, but he could not give any details on how many more flights may be used due to security reasons.

Earlier on Monday, Malian and French forces entered the town of Diabaly, where rebels had been targeted with air strikes.

"This advance by Mali's army into towns held by their enemies is a clear military success for the government in Bamako and for French forces supporting the operation," said French Defense Minister Jean-Yves Le Drian, who confirmed that Douentza had also been retaken.

Armored vehicles were reported to have met little resistance as they entered both towns because the rebels had already fled.

Douentza, some 800 kilometers (500 miles) east of Bamako on the way to the rebel stronghold Gao, was used as a base post for the rebels to advance south two weeks ago.

That Islamist push, culminating in the brief conquest of Diabaly, led the French to embark on a military operation involving 140 bombing sorties since January 11 and the deployment of 2,150 ground troops.

Other European powers and the US have offered logistical help amid fears that an overrun Mali could become a base for international militant attacks if the insurgency was not thwarted.

Meanwhile, the Malian government has voted to extend to three months a state of emergency that has been in place since January 12. The decision was taken at a special Cabinet meeting, with the progress being made cited as a reason.

In a statement announcing the extension, the government wrote that "the military operations to liberate the occupied regions of our country are panning out well and the need to install a peaceful social climate throughout the country."