US attempts to strike balance in ties with Uganda | World| Breaking news and perspectives from around the globe | DW | 27.03.2014

US attempts to strike balance in ties with Uganda

The US has agreed to bolster its military presence in Uganda to help hunt down fugitive warlord Joseph Kony, despite Washington’s tense relations with Kampala over the East African nation’s draconian anti-gay law. 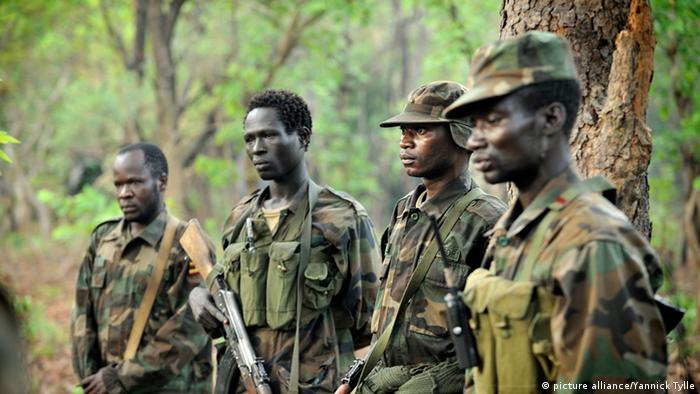 The Obama administration this week sought to strike a balance in its increasingly complicated relationship with Uganda, announcing the deployment of military reinforcements to help hunt down Joseph Kony, while also diverting aid money in response to Kampala's anti-gay law.

In a statement on Monday, the White House announced the deployment of CV-22 Osprey vertical lift aircraft, refueling planes, and 150 Air Force personnel to Uganda. That's in addition to the 100 US special operations troops who've been advising African forces in the hunt for Kony since 2011.

The Lord's Resistance Army (LRA) leader is wanted by the International Criminal Court (ICC) in The Hague for crimes against humanity and war crimes. He's accused of recruiting child soldiers, using girls as sex slaves, and intentionally attacking civilians. Kony is thought to be hiding somewhere in Central Africa.

But Washington's increased military support for the hunt comes at a delicate time in US-Ugandan relations. In February, Ugandan President Yoweri Museveni #link:http://wp.patheos.com.s3.amazonaws.com/blogs/warrenthrockmorton/files/2014/02/Anti-Homosexuality-Act-2014.pdf:signed a bill into law# that would punish people for their sexual orientation. Under the legislation, adult homosexual partners can be sentenced to life in prison for having consensual sex. Among other provisions, people who "promote" homosexuality can be sentenced to seven years in prison.

"All legitimate human rights advocacy work that involves anything related to the discussion on LGBT rights is now criminal," Maria Burnett, a senior researcher with the Africa Division at Human Rights Watch (HRW), told DW.

"So there’s a lot of practical public health programs that are now operating in an environment in which their work is potentially at risk of criminal prosecution," Burnett said.

In response to the anti-gay law, the Obama administration has #link:http://www.whitehouse.gov/blog/2014/03/24/promoting-regional-security-and-protecting-human-rights-uganda:announced a review# of its relations with Kampala. So far, the White House has diverted $6.4 million away from the Inter-Religious Council of Uganda, which works on HIV/AIDs prevention, due to the council's anti-gay stance. In addition, $3 million has been shifted away from tourism development, a health survey has been cancelled, and a military symposium and intelligence course will no longer be held in Uganda.

"Clearly we've advocated for the apprehension of LRA leadership for many years," Burnett said of HRW's position. "But the US timing of the deployment is unfortunate given that it sends mixed signals to Uganda's leadership about the consequences of the on-going review of assistance prompted by the passing of the anti-homosexuality law."

According to former American envoy David Shinn, the US has cultivated a close relationship with President Museveni since he first came to power more than two decades ago. In 2013, Washington transferred $480 million in aid to Kampala, 85 percent of which was allocated to strengthen the country's health care system. 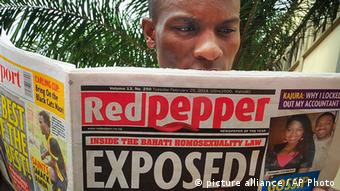 The tabloid "Red Pepper" publishes public figures' sexual orientation, which can lead to their imprisonment.

"Uganda was at the forefront in Africa of dealing very strongly with HIV/AIDs, which was a big feature of US assistance to Africa," said Ambassador Shinn, former director of East African Affairs at the State Department. Under the Museveni government, the prevalence of HIV/AIDs dropped from 29 percent during the 1980s to around seven percent today.

Kampala has also been one of Washington's key counterterrorism partners in the region, particularly in the African Union's fight against Islamist militants loyal to the group al-Shabab in Somalia.

"Even on the regional level, Uganda has provided the bulk of the troops for AMISOM in Somalia, an intervention that the United States has strongly supported," Shinn added. "Without Uganda, that would have never worked."

Recently, ties with Washington have been strained not only over the anti-gay law, but also due to Kampala's geopolitical role in the region, according to Shinn. The Museveni government has deployed troops to South Sudan in order to help President Salva Kiir defeat rebels there. Washington has called for the withdrawal of all foreign forces from South Sudan.

Despite these tensions, Washington says it remains committed to working with Kampala to apprehend Kony.

"Ensuring justice and accountability for human rights violations like the LRA and protecting LGBT rights aren't mutually exclusive," State Department deputy spokeswoman Marie Harf told reporters on Monday. "In fact, we have to do both, and that's what we're trying to do here."

Human Rights Watch, for its part, has #link:http://www.hrw.org/news/2014/02/19/uganda-anti-homosexuality-law-will-come-serious-cost:called on Washington to recall# its ambassador and the US Agency for International Development's (USAID) country director from Uganda in order to hold "strategic consultations" in response to the passage of the anti-gay law. But Shinn believes such a move on the part of Washington is unlikely.

"The US government doesn't take its cues from Human Rights Watch or for that matter any other non-government organization, except in the most unusual of circumstances," he said. "So it doesn't suprise me that that hasn't happened."

signed a bill into law

called on Washington to recall