The FBI claims an Iraqi resident in the state of Ohio has sought retaliation for casualties and damage caused by the Iraq war, which the US ex-President Bush had launched in 2003. 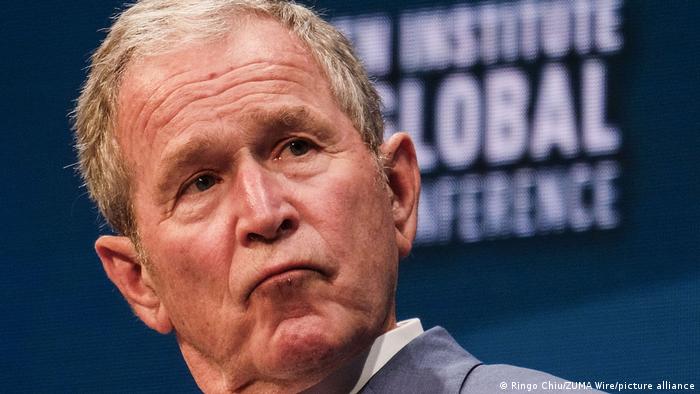 Former US President George W. Bush was allegedly the target of a plot to kill him over the 2003 Iraq War

The Justice Department on Tuesday said an Iraqi man who sought asylum in the US had plotted to assassinate former President George W. Bush.

The FBI filed a legal complaint in federal court in Columbus, Ohio, against the alleged conspirator, who was arrested early on Tuesday.

What did the FBI say about the plot?

The man, a Columbus resident, told an FBI informant that he was seeking to smuggle at least four other Iraqis from Mexico to the US to aid the assassination, the filing said.

He said they wanted to kill Bush "because they felt that he was responsible for killing many Iraqis and breaking apart the entire country of Iraq," according to the complaint.

The Bush administration had waged the 2003 US-led invasion of Iraq after alleging that Baghdad had possessed weapons of mass destruction, a claim that was later proved to be false.

The FBI said the conspirator had implied he had contacts with the so-called "Islamic State" group.

He reportedly surveilled locations associated with Bush in Dallas, Texas, and discussed with an informant how to obtain guns, security official uniforms and vehicles to be used in the plot. But the filing said the plot did not appear to come closer to materializing.

The 52-year-old arrived in the US in September 2020 on a visitor visa, and sought asylum in March 2021 after it expired.

The FBI had informants contact him shortly after his asylum application and until this month, according to the complaint.

Bush's decision to launch a war on Iraq has been widely criticized as a catalyst to the country's subsequent political turmoil and damage. The war toppled Saddam Hussein's government, but also resulted in the deaths of US service members and hundreds of thousands of Iraqi civilians.

In a sign of Iraqis' anger toward Bush, in 2008, a journalist hurled a pair of shoes at the former US leader during a press conference in Iraq at the end of his last term in office. "This is a farewell kiss from the Iraqi people, you dog," the journalist, widely popular in Iraq, said.

Last week, Bush made an apparent gaffe during a speech at his presidential center in Dallas.

While it seemed like he wanted to condemn Russian President Vladimir Putin's war in Ukraine, he referred to "the decision of one man to launch a wholly unjustified and brutal invasion of Iraq — I mean of Ukraine,'' Bush said.

"Iraq, too — anyway,'' he said, laughing, before blaming the slip of tongue on his age, saying simply "75."

The comment also drew condemnation from critics and politicians, who argued that it was not funny.

Iraq is at a crossroads as the losers of the country's recent elections are using violence in an attempt to overturn the results of the vote. At the same time, a genuine opposition is emerging for the first time.