U.S. and Germany Pledge To Intensify Security Cooperation | Germany | News and in-depth reporting from Berlin and beyond | DW | 29.10.2003

The United States and Germany on Wednesday pledged to intensify their cooperation to introduce a standardized passport system with integrated biometrical features. 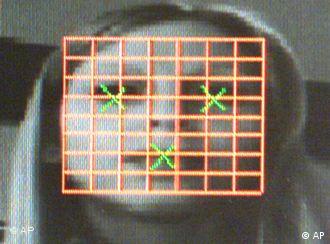 German and American officials believe biometrics will help in the battle against terrorists.

Passports with newly integrated biometrical security features such as fingerprints and facial scans are something that both the German government and the U.S. government have been pushing for now for quite a long time.

They share the conviction that such enhanced documents can contribute towards checking migration flows more effectively and flushing out terrorist elements. But it’s understood that only a unified passport system worldwide would have the desired long-term effect. However, the prospect of including biometrical features in passports raises the hackles of those who fear a violation of national data protection laws.

At their meeting in Berlin on Wednesday, U.S. Homeland Security Secretary Tom Ridge and German Interior Minister Otto Schily promised that transatlantic endeavors to introduce the new passport system would not run afoul of Germany’s restrictive data protection laws. But Ridge added there was no more time to waste in agreeing on a common security standard.

"America does not seek a double standard, we look for a single international standard," Ridge said at Wednesday’s meeting. "the (interior) minister and I feel very strongly that if a United States-European standard can be developed with regard to information sharing ... the kind of biometrics that sovereign countries and regional organizations feel is important for their security ... then that will pave the way for international agreements."

Schily supported his colleague, saying that a unified passport system would also accelerate customs procedures, which would benefit all travelers.

"If countries were to apply different security standards, then this would cause a lot of confusion for both customs officials and travelers," the interior minister said. "This is why a global standardization process is both desirable and necessary. Someone’s got to take the lead in this field and the United States and the European Union are prepared to get things moving. I’m sure that if everything works out alright, other nations will follow our example."

Touching on one of the more sensitive issues in current transatlantic relations, Ridge also expressed his dismay at European opposition to providing detailed information on passenger lists to intelligence agencies.

"We talked about an ongoing discussion we’re having with the European Union about passenger name record with a goal toward a satisfactory mutual resolution," he said. "We made progress in those discussions. The minister is part of a five-country initiative to bring some harmony within the EU" on the issue.

Schily and Ridge also admitted that efforts still need to be intensified to freeze the financial assets of known or potential terrorists. Both countries promised more resources in the fight against what’s become known as "underground banking."

As heavy rains hit swathes of New Zealand, the mayor of the especially devastated city of Nelson says the effects of the floods "couldn't be overstated." The town faced roughly two months' worth of rain in three days.

Firefighters have managed to bring a series of forest fires under control, but not before they killed at least 38 people and left hundreds more with burns or respiratory problems. Survivors are asking why more wasn't done to stop the flames' spread.