The US actress has called for women to not have sex until the state of Georgia rescinds its new abortion law. Some film and television companies working in Georgia said they would no longer work in the state. 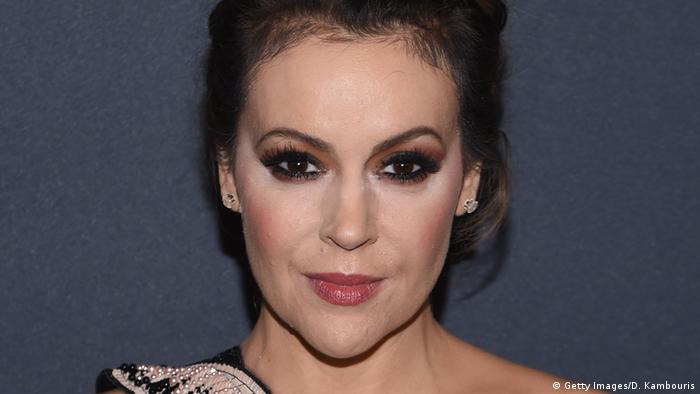 American actress and #MeToo activist Alyssa Milano struck a chord on social media after she called on women to stop having sex with men until the US state of Georgia rescinds a strict new abortion law.

"Our reproductive rights are being erased," Milano wrote on Twitter on Friday. "Join me by not having sex until we get bodily autonomy back." Nearly 40,000 people have liked the post since its publication.

A group of film stars led by Milano, including Alec Baldwin, Don Cheadle, Ben Stiller, Mia Farrow and Amy Schumer, had threatened in late March to refuse to work in Georgia if it adopted the new abortion restrictions.

The new law bans abortion as soon as a fetal heartbeat can be detected, which generally occurs in the sixth week of pregnancy. The state's Republican governor, Brian Kemp, signed the bill into law on Tuesday.

"We need to understand how dire the situation is across the country," Milano told the Associated Press on Saturday. "It's reminding people that we have control over our own bodies and how we use them."

She noted that women withholding sex to protest or advocate for political reform was not a new phenomenon.

She cited how Iroquois women refused to have sex in the 1600s in order to stop unregulated warfare. Most recently, she said, Liberian women used a sex strike in 2003 to demand an end to a long-running civil war.

Since the bill was passed, several independent film and television production companies have pledged to boycott the state unless the legislation is rescinded.

"I can't ask any female member of any film production with which I am involved to so marginalize themselves or compromise their inalienable authority over their own bodies," said David Simon, the creator of several successful TV series, including HBO's "The Wire."

"Killer Films will no longer consider Georgia as a viable shooting location until this ridiculous law is overturned," the company's CEO, Christine Vachon, wrote on Twitter.

Actor-producer Mark Duplass also supported the boycott. "Don't give your business to Georgia," he tweeted.

Milano, who starred in "Charmed" and "Who's the Boss?," told Buzzfeed News that she was contractually required to complete another month of filming in Georgia for her series "Insatiable" on Netflix, but said she would leave the show if production was not shifted elsewhere for subsequent seasons.

"I will fight tooth and nail to move 'Insatiable' to a state that will protect our rights," Milano said. "I will do everything in my power to get as many productions as possible, including 'Insatiable,' to move out of this state."

Chris Ortman, a spokesman for the Motion Picture Association of America, which represents some of Hollywood's biggest film studios, including Paramount, Sony, Universal, Disney, Warner Bros. and Netflix, said the group would continue to "monitor developments."

"It is important to remember that similar legislation has been attempted in other states, and has either been enjoined by the courts or is currently being challenged," Ortman said.

Georgia is an attractive choice for filmmakers and production companies, and offers a number of incentives: a cheaper cost of living than in Los Angeles, a variety of landscapes and, since 2008, tax credits of up to 30%.

Blockbuster films such as Marvel's "Black Panther" and "Avengers: Infinity War" were filmed in the state, and television series including "Stranger Things," "Ozark" and "The Walking Dead" have also been shot there.

Last year, more than 450 productions were based in Georgia, with production companies spending $2.7 billion (€2.4 billion).

The Writers Guild of America, which represents screenwriters, said the law would make Georgia "an inhospitable place for people who work in the film and television industry."

A leaked draft opinion suggests that the Supreme Court has voted to overturn the ruling that legalized abortion across the US. President Biden called on lawmakers to quickly draft legislation protecting abortion rights.

Abortion was the subject of debate long before the fundamental right to the procedure was overturned in the United States, of course. DW checks the facts on claims made by opponents and supporters of abortion rights.