Up to 63 Rohingya people dead as vessel carrying refugees shipwrecks

The United Nations has confirmed that a boat headed to Bangladesh carrying Rohingya refugees shipwrecked in the Bay of Bengal. The UN has demanded better access to all of Myanmar to investigate possible rights abuses. 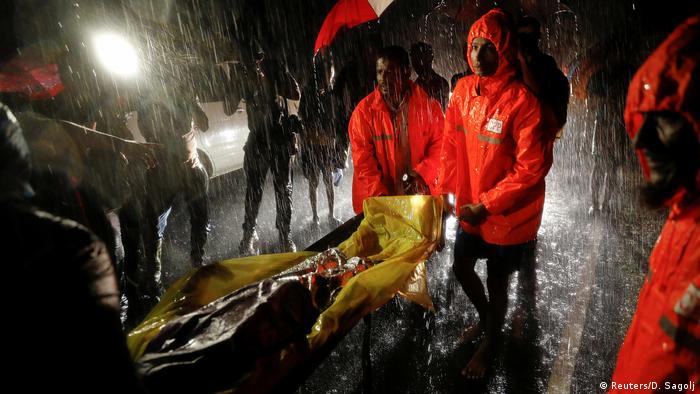 The UN's International Organization for Migration (IOM) on Friday confirmed that 63 passengers were confirmed dead or missing and presumed dead after the shipwreck of a vessel carrying Rohingya Muslims who were fleeing violence in Myanmar.

IOM spokesman Joel Millman told reporters in Geneva that 23 deaths were confirmed after eight more bodies were found on Thursday. "We believe 40 are presumed dead or drowned," he said.

Millman said the boat departed for Bangladesh from Myanmar with 80 people on board, half of them children. The vessel had been at sea for two days with no food or water.

The captain had not charged the passengers for the transport and had been trying to avoid sea patrols or checkpoints, Millman said.

"The details are absolutely astonishing and remarkable," Millman said. "At one point, [the captain] chose to anchor the vessel, but that proved to be a fatal mistake as the rough seas were much worse than he supposed. This was easily within sight of land.

"People were actually quite distraught that they had gotten so close to safety and yet drowned because the boat was destroyed by the high seas and the torrential rains and wind," Millman added.

Also on Friday, the UN Human Rights Council extended the mandate of a fact-finding mission in Myanmar until September 2018.

In its resolution, the council stressed "the need to grant it full, unrestricted and unmonitored access to all areas and interlocutors." It also expressed "grave concern at the recent reports of serious human rights violators and abuses in Myanmar, in particular in Rakhine State."

Hau Khan Sum, Myanmar's representative on the council, said the mission was "not helpful, it is not in line with the situation on the ground and would do no good finding a resolution to Rakhine issues."