The FIFA headquarters in Zurich are a secretive spot in which the future of soccer is decided. Its simple exterior design conceals a rich interior where form is well attuned to function. 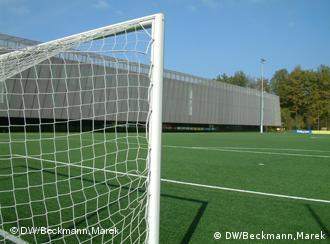 The unusual new headquarters for the International Association of Association Football (FIFA) now stands in one of Zurich's most exclusive neighborhoods. For around 145 million euros ($184 million), FIFA's 208 member countries chipped in to develop a "skyscraper" that is largely underground. Building was completed three years ago, well in time for the 2010 World Cup in June.

The unique building unfolds along 134 meters (440 feet) in a series of sleek, glassy partitions. But not everyone occupying its offices has made peace with the design by Swiss architect Tilla Theus, in which understatement trumps grandeur, at least on the surface.

"The house we were in before was much prettier, of course," said FIFA President Joseph Blatter. "There, I had a view of the lake, but on the other hand, we're not out to look impressive." 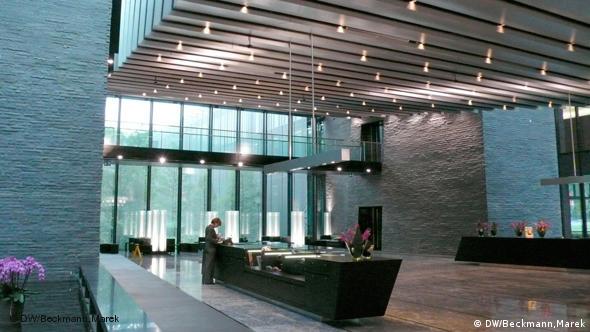 Once inside the building, visitors can see that it's comprised of multiple stories. Two thirds of the headquarters lie underground and include space for archives, parking, meetings, technology and a prayer room. The segment above ground houses offices for 300 employees, the reception area and a conference room.

Although the building's simple exterior blends in with the woody landscape, the interior is marked by rich material luxury. Its design features costly works from glass, Brazilian shale, and American walnut wood. The aluminium walls in the headquarters were hammered from a specially constructed machine and are adorned with chrome steel hand railings that artfully reflect the light streaming inside.

Modesty was clearly not at the fore in constructing FIFA's interior - a fact which reflects the success of the organization as a whole under Blatter's firm leadership. During his tenure, FIFA has grown from a shaky venture to an international organization with a global scope. 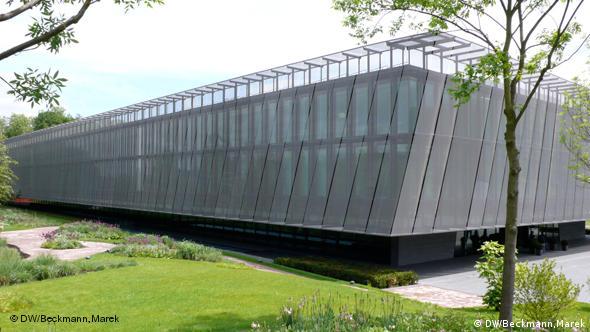 The FIFA headquarters viewed from outside

In contrast to many parliamentary buildings, where glassy, transparent exteriors suggest the ability of the outside world to keep an eye on its elected officials, FIFA's underground design closes it off to the public.

The third of its five underground stories contains the executive committee's meeting chamber. Inside, aluminium walls and a cool, lapis lazuli floor lend the chamber an enclosed feel.

"Places where people make decisions should only contain indirect light," said Joseph Blatter, "because the light should come from the people themselves who are assembled there."

Here in FIFA's hidden center, a small circle of leaders reach decisions on new reforms, rules, sanctions, legal issues and the conferral of world championships. Sometimes the results of their meetings have a profound impact on soccer worldwide.

The importance of certain questions they discuss explains why the FIFA headquarters is constructed the way it is, said Joseph Blatter.

"It's more important to me that the employees of FIFA have direct access to sunlight rather than the executive committee members, who are only occasionally here in the office," according to Blatter. "Also, the room is closed off so that the result of a vote cannot be known until we leave the chamber." 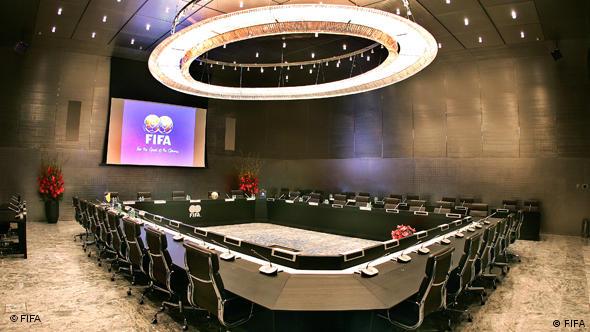 Hermetically sealed: the underground meeting room for the executive committee

A street of its own

FIFA's prayer room is also among the most unusual points of its design. The onyx room opens upward toward an indirect light and glitters like an oversized diamond. Visitors can enter from one of two sides, and green arrows in the passageways point toward Mecca as a service to Islamic FIFA members. Otherwise, though, the room is bare and cold.

"People of each religion agreed not to include specific religious ornaments in order to create a neutral space for everyone," said Theus. The sole adornment is two benches inside the prayer space.

The headquarters lie on FIFA Street, which was approved by the city specifically for the new structure. "I'm really proud to be in charge of this 'Home of FIFA,'" said Blatter and grinned. After a glimpse inside, it's easy to see why.

At the FIFA headquarters in Zurich, soccer star David Beckham has submitted England's bid to host the 2018 or 2022 World Cup. Several other European potentials hosts submitted bids, as did four Asian nations and the US. (14.05.2010)