Under construction: Crossing the new ′border′ into Crimea | Europe| News and current affairs from around the continent | DW | 10.03.2014

Under construction: Crossing the new 'border' into Crimea

A makeshift border is now under construction between Ukraine's mainland and its Crimean peninsula. While it might be a sign of Russian confidence in Crimea, for now the ad-hoc "crossing" has the makings of a farce. 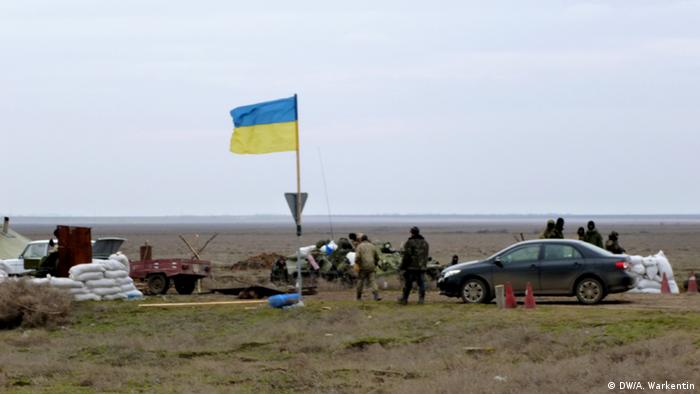 Construction workers are busy on the narrow Isthmus of Perekop that connects Crimea to the Ukrainian mainland.

The road leading to Simferopol, Crimea's capital, is jammed with concrete blocks, both on the Crimean side and on the Ukrainian mainland a few dozen meters away. It looks like they're constructing a border crossing.

The Ukrainian soldiers, Kalashnikov rifles in hand, their faces hidden by masks, look grim. A closer look reveals them as friendly, insecure young men. Just like the Russian soldiers 50 meters (160 feet) down the road.

"Don't worry, we don't have orders to shoot," the young man on the Crimean side says, clearly a Russian officer. He declines to say who didn't give him orders to shoot - Moscow or Simferopol. He also won't let me take photos and informs me that he'll take away my camera if I do. The Ukrainians don't mind having their pictures taken.

'Crimea is our home' 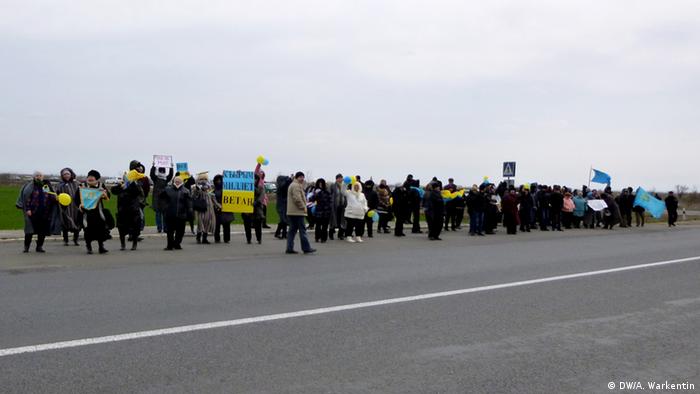 I head toward Crimea's capital, Simferopol. The usually busy road is almost empty. But a group of Crimean Tatars waving Ukrainian flags are gathered at the Voikove city limits. "Russia go home," one of the placards reads. Another insinuates that Russian President Vladimir Putin suffers from botox poisoning.

There have been Tatar demonstrations in other villages, too. The historically Muslim Tatars are, for the most part, pro-Western. Few women at the Voikove protest wear head scarves. They have applied make-up and don fancy clothes.

"The Germans don't even know that we exist," one woman says, adding that her Tatar ancestors, together with Russia's ethnic Germans, survived deportation to Kazakhstan and Siberia, where they helped each other.

Russia, she says, is a huge country, and Russians can live wherever they choose to. "But we, the Crimean Tatars, have only this small homeland - Crimea." The 50-year-old asks who will save them from being deported yet again when Putin comes.

Roughly 500 demonstrators initially showed up for the protest in Voikove, but the bitterly cold wind from the east drove many away. Armed with banners and balloons, the remaining protesters, some pushing baby carriages, continue.

Where are the fascists?

Back to the strangely absurd border crossing: Dozens of concrete blocks force all vehicles to zigzag slowly. Mobile construction cranes are positioned on both sides, busily piling up even more barricades. When I ask what all this is for, the answer is: "We're following orders." Again, there was no answer as to who gave those orders. 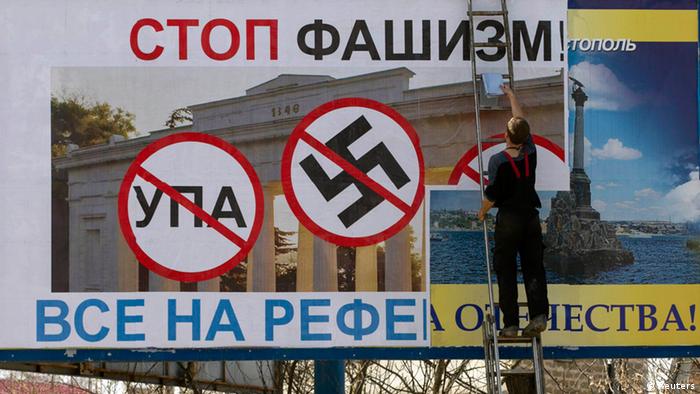 When I have no idea how to open my rental car's trunk, a friendly soldier simply tilts both back seats, and peers into the empty trunk. No weapons, no explosives. Russian TV in Simferopol reports that hundreds or even thousands of "fascists" are on the road to "blow up the rightful pursuit of the people in Crimea to be reunified with Russia."

With the help of a power shovel and an ancient tank carrier from the next village, the Ukrainians have meanwhile dug in on the virtual border. They've set up a field kitchen, and rusty old Soviet Shiguli cars rattle along from neighboring villages bearing borscht soup, bacon and eggs.

On the Ukrainian side, there are about 30 to 40 people; on the Russian, there are maybe three or four. But nobody knows how many Russians are holed up in the building off to one side. An elderly man wearing a striking Cossack hat looks out of a window, grinning.

So far, there are no passport controls. Neither the Russians nor the Ukrainians asked to see my passport nor my driver's license. Obviously, no one along the absurd border between Ukraine and Ukraine has given the order.

In Simferopol, few seem to doubt how the upcoming referendum on joining Russia will turn out. There's a widespread sense that Putin has already decided the outcome, and the focus is turning to practical matters. (10.03.2014)