The UN has strongly urged Iraq's political leaders and civil society to resolve the current political deadlock. The call came as more than 50 mass graves were discovered in former "Islamic State"-controlled territory. 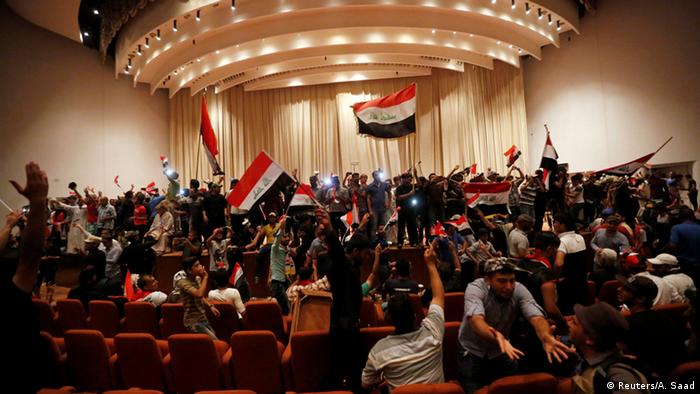 Despite notable progress on the ground against "Islamic State" (IS) militants, top UN envoy in Iraq Jan Kubis warned the UN Security that the country's ongoing political crisis and chaos are only serving the interests of IS extremists, adding that the jihadis remain "a formidable and determined enemy that constantly adjusts its tactics and attack patterns."

The latest US troop deployment is modest in size but will put soldiers nearer the front lines, primarily in advisory roles. Apache helicopters will also be provided, as officials hope to retake the city of Mosul. (18.04.2016)

A profound political crisis has paralyzed the work of the Iraqi government and parliament, Kubis said, arguing that the chaos "added a new layer of complications to the already complex set of military, security, humanitarian, economic and human rights challenges the country is facing."

Urging Baghdad to resolve the crisis, Kubis pointed to the discovery of more than 50 mass graves in territory retaken from IS, including three found on April 19 in the football pitches of Ramadi which contained a total of up to 40 sets of remains.

Ramadi was declared liberated when Iraqi forces seized the main government compound back from the IS late last year, but the city was completely retaken only in February.

Kubis also warned that the humanitarian crisis was worsening in Iraq, with nearly a third of the population, or more than 10 million people, now requiring urgent aid - double the number of 2015.

A further two million people could be displaced by the end of the year by new military campaigns aimed at driving out IS, Kbis projected.

Kubis' warning on Friday came just a week after supporters of Shiite cleric Muqtada al Sadr stormed the heavily fortified Green Zone in Baghdad and broke into the parliament building. The demonstration was sparked by MPs' failure to approve nominees for a cabinet of technocrats to replace the government of party-affiliated ministers.

Setting up camp in the heavily-guarded area marked a culmination of months of sit-ins and protests calling for an overhaul of Iraq's political system, which put in place by the US following the overthrow of Saddam Hussein in 2003.