The UN has warned that an electoral crisis in the Congo may trigger widespread violence. Dozens of people were killed in violent protests against President Joseph Kabila last month. 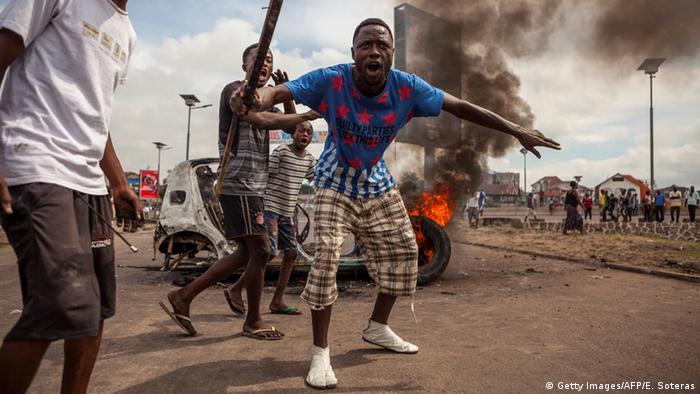 A dual electoral and constitutional crisis in the Democratic Republic of Congo is likely to spiral into widespread violence if a political solution is not reached, the United Nations warned on Tuesday.

The UN's special representative for the Congo, Maman Sambo Sidikou, told the Security Council that if the situation continues "large-scale violence is all but inevitable."

President Joseph Kabila, in office since 2001 after taking over from his assassinated father, is barred by constitutional limits from seeking a third term. Elections were to be held in November before Kabila's term expires on December 20, but the country's electoral commission said that logistical and budgetary obstacles require the election to be pushed back to at least December 2018.

A court ruled that Kabila can remain in power until the next election.

The opposition accuses Kabila of controlling the electoral commission and courts in a bid to remain in power.

The crisis erupted into violence in September, when dozens of people were killed in clashes between security forces and the opposition in the capital Kinshasa. Sidikou said there was "no immediate resolution in sight" to the crisis.

"Actors on all sides appear more and more willing to resort to violence to achieve their ends," said Sidikou, who also heads the UN's 22,000 strong peacekeeping force, MONUSCO.

"While MONUSCO will do everything it can within its mandate to protect civilians, the scope of the threats dramatically outstrip the mission's capabilities," he warned. "The coming period will certainly be extremely difficult, the tipping point in the serious violence could be reached very quickly."

With more opposition protests scheduled on October 19, Sidikou said the UN and regional organizations like the African Union must encourage dialogue to prevent a spiral of violence.

On Monday, the government arrested Bruno Tshibala, the deputy secretary-general for the main opposition Union for Democracy and Social Progress (UDPS), at the Kinshasa airport as he was boarding a flight to Brussels.

The government accused Tshibala of being behind last month's deadly protests.

The UDPS has vowed to hit the streets if Tshibala is not released.

France says it's seeking EU sanctions to press Congolese President Joseph Kabila to make way for delayed elections. The US imposed sanctions last month against two individuals, with the EU yet to act. (05.10.2016)

The electoral commission in the Democratic Republic of Congo has said it wants to push back national elections to late 2018. The announcement comes as tensions rise over the future of the country's presidency. (02.10.2016)

No change likely in DRC

According to the Constitution President Kabila cannot stand for re-election when his term ends in December. But he doesn’t seem keen on leaving. And the chances for a change at the top are not good. (04.10.2016)