The head of the UN's nuclear watchdog says Iran is cooperating with a probe into the country's nuclear activities. World powers have long been attempting to strike a deal with Iran over its contested nuclear program. 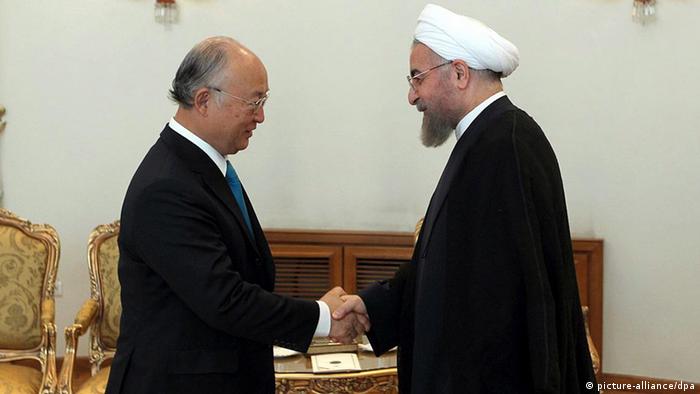 On Monday, Yukiya Amano, the director-general of the International Atomic Energy Agency (IAEA) said that he had seen signs that Iran was cooperating with a long-stalled investigation into whether it had enriched uranium for military purposes.

Amano traveled to Tehran on Sunday for talks with Iranian President Hassan Rouhani and other leaders and officials.

His visit came ahead of an August 25 deadline, by which time Iran is expected to provide the IAEA with more information about what the UN agency calls the possible military dimensions of its nuclear program, which officials there say is only used for medical research and power generation.

Without providing specifics, Amano said the country had begun implementing the transparency measures it had agreed to carry out before next Monday's deadline.

"We have started and that is important and I expect that progress will be made over the next week," Amano said, speaking at the Vienna Airport on his return from Tehran.

The UN's chief nuclear inspector said he had been able to follow up on his investigation of detonators that could have been used in nuclear weapons, and was in discussions with Iran about two other explosive experiments. However, he added that there was a need for Tehran "to speed up" efforts to address the IAEA's concerns.

World powers are continuing to negotiate with Iran to strike a permanent deal to curb its nuclear activities in return for easing crippling sanctions. According to the other six countries involved in the talks - the United States, Britain, China, France, Russia, and Germany - compliance with the IAEA's probe is crucial to signing any such accord.

Discussions have been ongoing since 2003, and have so far failed to result in an agreement.

An interim deal was struck in November last year, with a view to find a permanent solution by July. Under that deal, Iranian officials agreed to scale back nuclear activities for six months and to allow inspectors access to nuclear sites, including the Gachin uranium mine and the Arak heavy water reactor, in return for some relief from sanctions.

After failing to hammer out a lasting agreement in July, Iran and the six world powers extended their deadline to November 24.

In Vienna, P5+1 talks make no progress on Iran nukes

Foreign ministers meeting in Vienna to discuss Iran’s nuclear program have failed to advance the faltering talks. The target date for a deal is now only a week away. (13.07.2014)