In the aftermath of the terrorist attacks in Paris, the UN special rapporteur on freedom of expression, David Kaye, says officials "do not need to capitalize on the tragedy" by undermining people's rights to privacy. 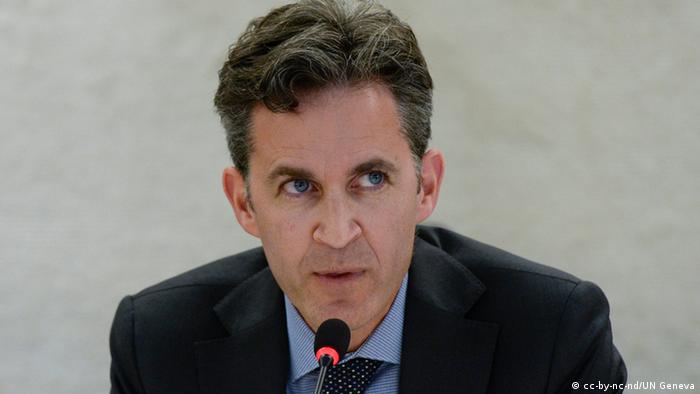 David Kaye originally talked to #mediadev about online privacy and freedom of expression the day before the bloody attacks in Paris on Friday November 13, 2015. He followed up his interview, which you can find below, with the following email response:

"The attacks were terrible and I'm sure we all feel the pain of the victims and their families. … The attacks reflect a real threat of terrorism and so it's expected that governments will take steps to counter that threat. I'm afraid that officials may use the attacks to pursue an agenda that predated them, such as undermining digital security.

We need officials who will take the time to understand exactly what happened and objectively determine whether they can recalibrate the tools they already have to address terrorism. We do not need officials to capitalize on the tragedy to take steps that undermine everyone's digital security, privacy, and rights to freedom of expression."

Here is the original interview, conducted on Thursday November 12, 2015 on the sidelines of of the Internet Governance Forum held in Brazil.

#mediadev: From the very beginning of the Internet, people had great expectations about how it would foster freedom of expression and citizen participation. But decades later, is the Internet now a big disappointment?

David Kaye: I don't think so. In many ways the Internet exceeds what people thought it would be. First of all, you have infrastructure such as broadband and satellites that make the Internet fast. Then there is now a huge amount of connectivity, even though there is a long way to go. And that the Internet has, in a way, replaced other forums is remarkable. I am not sure that people in the 1990s would have said the Internet is going to be the place for international communication, the place where people go to access communication.

Has the Internet helped freedom of expression?

Absolutely. Freedom of expression as outlined in Article 19 of the Universal Declaration of Human Rights is the right to seek, receive and impart information and ideas of all kind across frontiers through any media. Any media captures the Internet; regardless of frontiers is the Internet; and then anyone can also seek, receive and impart information on the Internet. Twenty years ago when you wanted to share an idea with the world, how would you do it? You would publish an article in the newspaper. But to be honest, that option is only available to the elites, to the well-educated. Now, you can do it on the Internet.

But the independent watchdog Freedom House says there has been decline in the freedom of the Internet in the past years.

I think the Internet itself isn't the problem. The Internet offers all the different things needed to have freedom of expression. The problem is that the Internet is also a tool for governance. The more we are connected, the more governments know who we are and where we are. And when they don't like what we are sharing, saying or searching, they know how to get to us. That is a huge problem. But this is a problem of governance and censorship and attack that also exists in the physical space. It existed when people wrote physical articles and it will exist forever. I think our task is to reduce its incidence.

Can you detect general trends against freedom of expression worldwide?

I am very much a cheerleader for the Internet. But there are really negative trends and I would say the biggest one is the use of the Internet as a tool to censor information. Since so much of our information comes online, it is very easy for governments to filter content, to throttle speeds so we don't get access generally, to take down platforms or take down services entirely, like telecommunications services can be taken down entirely during times of protest which we have seen in the past couple of years.

Are there special regions you are worried about?

We have seen for example, global takedowns in places like Burundi and the Democratic Republic of Congo. We have seen activists who post material online, such as on Facebook, being targeted in Malaysia, Thailand, Myanmar, and a number of other different places. In China, we see filtering and throttling and vast denials of access to platforms and to different services. And we see targeted surveillance and sometimes bulk surveillance in countries such as the United States and Russia. There is new legislation in France and the United Kingdom and elsewhere that are following these lines. It is a global problem.

Is there a divide between the kind of surveillance in the developing and the developed world?

To get back to your role as UN special rapporteur for freedom of expression, what is the biggest project are you currently working on?

The biggest project is on the responsibilities of the corporate sector in the Internet and telecommunications space. And this raises the questions of which industries have an impact on freedom of expression? What are the legal issues and the policy issues? What has already been done around creating principles? What are the responsibilities of corporations? How do you operationalize this? Hopefully after consultations with experts and governments, corporate visits, regional meetings, and thematic reports, we will end up with a set of principles for corporate behavior drawn from human rights and we would ask the human rights council to adopt them or to approve them in some way.

What are the responsibilities of these big global platforms. You said, people are posting on Facebook and getting arrested because of their posts. Does Facebook have any responsibility?

I think that they do. I think they acknowledge that they have some responsibilities. But this big project of ours is to figure out the scope of these responsibilities. Where do we find those responsibilities? Do they come from terms of service? When Twitter takes down a tweet or Facebook takes down a post, they are acting as regulators of freedom of expression. They can do this based on their terms of service. But that is also what governments do and governments are often asking these platforms to do these things. So what is their responsibility to the user or the producer of content and what is their responsibility to the government? And where does that come from? Does it vary according to the countries where they are doing business? Those are the issues that I actually think are unresolved and that is what our project is going to try to identify.

Do corporations have a real motivation to take on these responsibilities?

I don't think corporate actors like to be put in the situation of undermining activists or undermining freedom of expression. The business of social media is communication and expression and I don't think any of them want to be in the business of regulating that communication in a way that differs from general norms in human rights law. The problem is that some corporations go beyond this and have standards that are based on civility rather than being based on human rights. These companies need to be clear that this is what they are doing. They need to be clear when they take down material that is say, offensive but doesn't violate any law and is consistent with human rights law, then they are doing something different from what governments do.

They are media organizations. Whether they are media organizations that need to be regulated in the same way as traditional media is a different question. And some of them maybe heading into more of a direction of being like traditional media. Facebook has now adopted a way to feed news direct from publishers so how is that really different from what Huffington Post does? I think there is a risk from Facebook's perspective that they will be treated more like traditional media. So there are incentives for such organizations to get ahead of their curve of government regulation, which is to adopt standards that are rooted in human rights and that are less assailable and more transparent than they are now.

I am not arguing that they are rights. They are tools. Do you have a right to a pen? Not necessarily but you have the right to write - it doesn't matter what you use. Encryption is a tool that makes freedom of expression possible. That may seem like splitting hairs but I think there is a difference there and the difference is we should be focusing on the right. If governments want to restrict our access to such tools, then they need to justify this on the basis on human rights norms. Having said that, it is still a big concern that encryption and anonymity are especially at risk in the developing world. They are either not available or where they are available, it is very common for governments to prohibit them.

David Kaye was appointed as special rapporteur for freedom of opinion and expression for a three-year term in August 2014. He teaches at the Irvine Law School at the University of California and has researched and written widely on international human rights law and rights abuses.

Sharing and discussing ideas, experiences and research about media development, digital transformation and freedom of expression. Join the global conversation.