In light of an "unprecedented" level of humanitarian need, the United Nations has requested $16.4 billion to help the world's most vulnerable people. Forty percent of the aid would go to Syria. 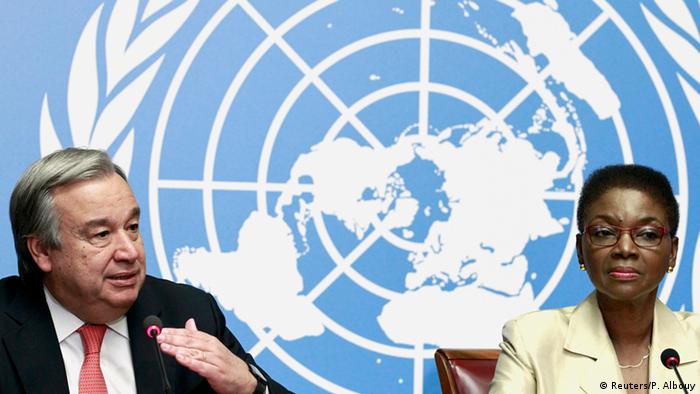 The United Nations has appealed for $16.4 billion (13.3 billion euros) to pay for global humanitarian needs in 2015 for more than 57 million of the world's most vulnerable people affected by conflicts and natural disasters.

Since asking for $12.9 billion a year ago to help some 52 million people, the number of people in need has nearly doubled to a record 102 million, UN humanitarian chief Valerie Amos said.

"We will continue to put people at the centre of our relief efforts and do everything we can to respond quickly and effectively," said Amos, who launched the appeal in Geneva. "But the rising scale of need is outpacing our capacity to respond."

With 80 percent of the needy in conflict-ridden countries, Amos said the demands for aid are outstripping the ability to pay for them.

Antonio Guterres, UN High Commissioner for Refugees, said there is an "unprecedented" level of humanitarian need.

"This is not business as usual in the humanitarian world," Guterres said. "Without more support there simply is no way to respond to the humanitarian situations we're seeing in region after region and in conflict after conflict."

More than 40 percent of the appeal would go to help 18.2 million people suffering from the war in Syria.

The request from the UN came just a week after the World Food Program announced it would have to cut food rations to Syrian refugees.

In response, the UN has now requested $2.8 billion to help those displaced by the conflict inside Syria and a further $4.4 billion to help more than 3,250,000 Syrian refugees.

The 2015 request, on behalf of 455 aid organizations, does not, however, include funds to help feed millions facing hunger in Africa's Sahel region, which has seen repeated droughts and conflicts. That appeal is being launched in February.

Joachim Rücker, Germany's ambassador to the United Nations, has been chosen to lead the UN Human Rights Council. Rücker is the first German to be elected to this post. (08.12.2014)