The United Nations refugee agency says IS has placed residents in harm's way to try to prevent attacks on their fighters. Some 3,700 people have fled the militant-controlled city since Iraq lauched a bid to reclaim it. 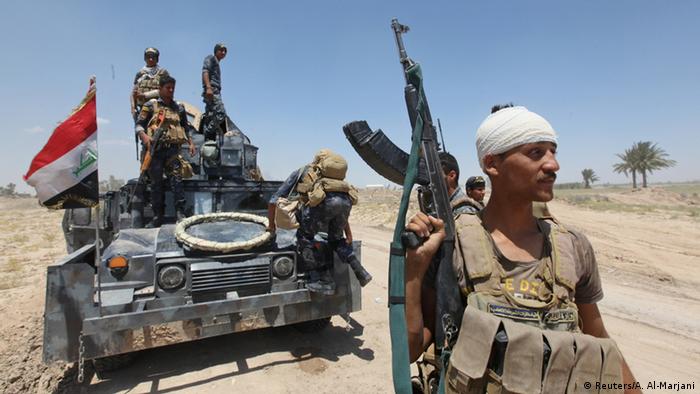 UNHCR spokesman William Spindler told a news briefing on Tuesday that the refugee body had received "several reports of people being used as human shields by IS" in the besieged Iraqi city.

The outskirts of Fallujah have been the scene of intense fighting for more than a week as Iraqi forces push to retake the city from the militant group.

Spindler told journalists that around 3,700 residents had fled the city since the onslaught had begun. But as many as 50,000 more remained trapped and several civilian casualties had been reported over the past few days.

His comments backed up remarks by UNHCR chief Bruno Geddo, made in an interview with DW on Monday. Geddo warned that the use of human shields could lead to a "major bloodbath."

Geddo also drew attention to the problems faced by the city's children, as families remain trapped by the fighting.

"They are very, very traumatized. They see that their parents are in panic and by the bombing and by this deep seated fear. Children are more deeply affected than adults," he told DW.

Another aid group, the Norwegian Refugee Council (NRC), also warned of an unfolding "human catastrophe," and repeated a call for civilians to be guaranteed a "safe exit" before more lives were lost.

The NRC said a lack of food, medicine, safe drinking water and electricity in Fallujah is "pushing families to the brink of desperation." 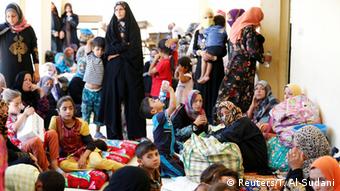 Hundreds of civilians have fled the city in recent days

Meanwhile, Iraqi troops repelled a four-hour assault by IS fighters in the south of the city on Tuesday.

The attack started at dawn in Fallujah's Nuaimiya area where Iraqi troops captured almost 85 percent of the ground the previous day, two officers with the Special Forces told The Associated Press.

The militants used tunnels, deployed snipers and sent six explosives-laden cars to hit the troops, the officers said. Iraqi forces suffered casualties, but no details were given.

Tens of thousands of pro-Iraqi government forces are involved in the assault, backed by US-led coalition airstrikes.

Observers believe the fighting will intensify over the next few days as elite forces attempt to reach the city center.

Two Yazidi women, being held by IS in the city, were rescued during fighting on Monday.

The minority Yazidi group was singled-out by IS as they captured significant territory in Iraq in 2014, leading to the capture and enslavement of more than 5,000 people. More than half of them remain unaccounted for.

Fallujah, which lies just 50 kilometers (30 miles) west of Baghdad, has been under IS control for more than two years.