Khartoum has declared war on South Sudan, according to the South's leader. His comments came as the violence between the two countries intensified and the UN called for an end to fighting. 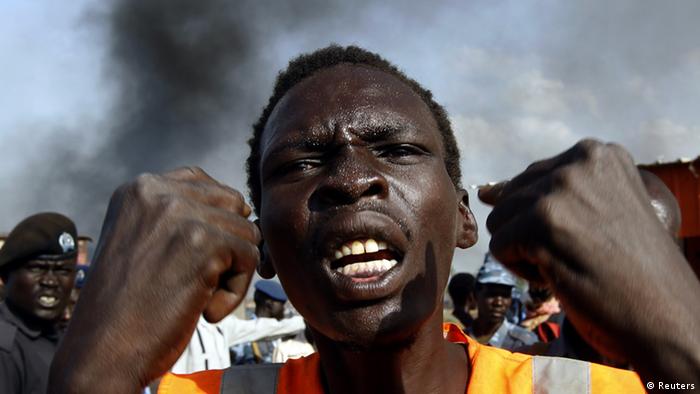 South Sudan President Salva Kiir said Tuesday that Sudan had declared war on his country. He made the comments during a visit to China to boost ties between Juba and Beijing.

Is the international community doing enough in Sudan?

Nine months after the separation of South Sudan from the north, the two sides are now involved in daily border skirmishes. The international community is doing little to help and the UN forces are also powerless. (18.04.2012)

In New York, the U.N. Security Council was briefed on the situation late on Tuesday. The 15-nation body was told that aerial bombardment of South Sudan’s s Unity State on Monday night had killed 16 civilians.

Members demanded “an immediate halt to aerial bombardments by the Sudanese armed forces and urged an immediate cease-fire and return to the negotiating table,” US ambassador to the UN and current council president Susan Rice told reporters.

The fighting erupted after South Sudan's military seized the Heglig oil field two weeks ago. South Sudan said on Sunday it had withdrawn its forces from the oil town.

Disputes over oil and borders

China's Hu called on the two countries to resolve the conflict through negotiation, repeating similar statements made by China's foreign ministry.

"The top priority is to actively cooperate with the mediation efforts of the international community to stop the armed conflict in the border region," Hu was quoted as saying by Chinese state television.

Neither Sudan nor South Sudan has so far issued a formal declaration of war.

Bashir has threatened to crush the "insect" government of South Sudan and vowed to continue his military campaign until all southern troops were pushed out of the north.

The two countries have been unable to resolve disputes over borders and oil revenues since South Sudan seceded from Khartoum in July after gaining independence in a referendum.