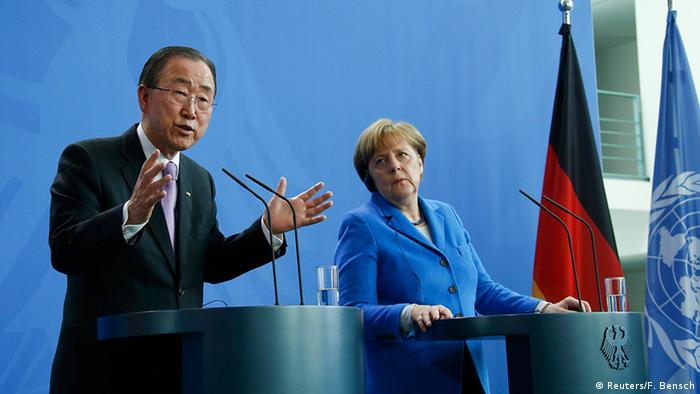 Ban Ki-Moon praised German Chancellor Angela Merkel's leadership on the refugee crisis while striking out against asylum restrictions in some European countries and a surge in anti-immigrant politics.

Calling Merkel a "true moral voice," Ban said in Berlin on Tuesday that the Chancellor has shown compassion and leadership in pursuing policies that, while not always easy, were just.

While Merkel tried to put "the protection of every individual person" in focus, other politicians have "chosen the easy path," the UN chief said.

"Extreme right-wing and nationalistic political parties are inflaming the situation where we need to be seeking solutions, harmonious solutions based on shared responsibilities," he cautioned.

He said Europe could do much more to help refugees, and not only with money.

The comments came a day after the EU and Turkey appeared to have agreed on the outlines of an agreement to handle a migrant crisis that has driven deep divisions into the 28-member bloc.

The Q&A on EU-Turkey refugee deal

Under the agreement, Turkey would take back migrants from Greece in exchange for Europe agreeing to accept Syrian refugees directly from Turkey.

The policy is intended to dissuade human smugglers and migrants from making the dangerous sea journey to Greece and lead to a more organized movement of legitimate asylum seekers to Europe.

In exchange, the EU would provide 6 billion euros ($6.6 billion) over three years to improve the conditions of Syrians in Turkey, the EU would ease visa restriction on Turkish citizens and Turkey's stalled EU membership process would be accelerated.

The proposed agreement has come under criticism, particularly over questions of its compatibility with international human rights law. Echoing concerns from the UN's refugee agency, Ban demanded Europe maintain "humanity and pay attention to human rights."