The United Nations has said a team of its chemical weapons inspectors is safe after coming under attack in Hama province in Syria. Syrian news outlets initially reported that the OPCW team had been kidnapped. 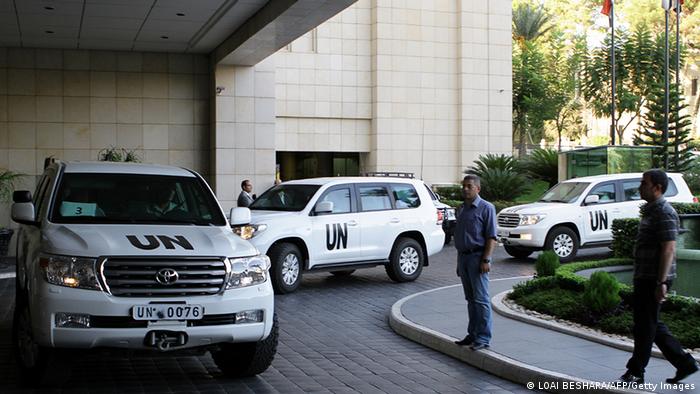 The UN's Organization for the Prohibition of Chemical Weapons (OPCW) said on Tuesday that six of its chemical weapons inspectors in Syria were "safe" and travelling back to their operating base after coming under attack.

The UN agency was responding to reports on Syrian state media claiming that the group had been abducted by rebel fighters.

"All team members are safe and well and heading back to their operating base," OPCW spokesman Michael Luhan told the AFP news agency.

"Two cars were seized by terrorist groups carrying 11 people - five of them Syrian drivers and six from the fact-finding misson," the ministry statement said.

The OPCW team was deployed to the region to investigate allegations of chlorine gas attacks by regime forces in the region.

OPCW Director-General Ambassador Ahmet Uzumcu expressed his concern for the safety of his staff on fact-finding missions, appealing to all sides in Syria's civil war to guarantee their safety.

"Our inspectors are in Syria to establish the facts in relation to persistent allegations of chlorine gas attacks," Uzmucu said in a statement.

"Their safety is our primary concern, and it is imperative that all parties to the conflict grant them safe and secure access."

Chlorine, a common chemical, is one of the substances banned by the Chemical Weapons Convention, which the OPCW is charged with monitoring.

In separate news out of Syria on Tuesday, Italian aid worker Federico Motka returned home after over a year in captivity.

Italy's Foreign Ministry said that Motka "arrived this morning at the Roma Ciampino airport where he was welcomed by Foreign Minister Federica Mogherina."

Motka was abducted on March 12, 2013, and released on Monday. He returned to Italy via Turkey.

Dozens of people are reported to have been killed when a car bomb went off in the Syrian city of Homs. Meanwhile, the world’s chemical watchdog is to investigate the alleged recent use of chlorine gas in the conflict. (29.04.2014)

Syria 'not yet free of chemical weapons'

All chemical weapons were to have been removed from Syria by this weekend. But that won't happen because many different chemicals can be used as weapons, and President Bashar al-Assad may have other hidden stockpiles. (27.04.2014)