The UN secretary-general has urged the international community to step up its efforts to combat climate change at a major summit in New York. Leaders from 120 countries are attending the meeting. 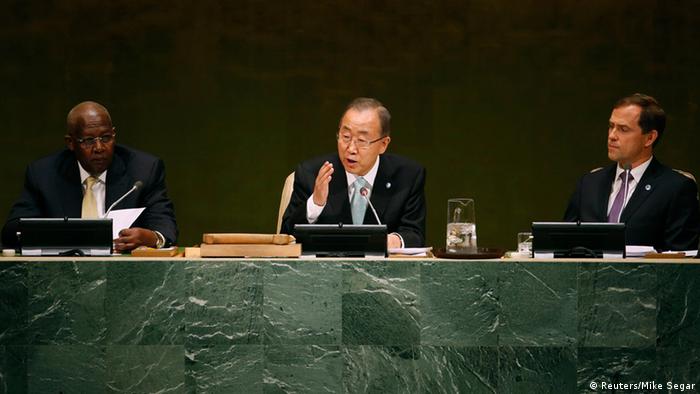 Ban Ki-moon opened the UN Climate Summit on Tuesday with a plea for world leaders to set the planet on a "new course" and do more to reduce greenhouse gases.

"Climate change threatens hard-won peace, prosperity and opportunity for billions of people," Ban said in his opening remarks. "Today we must set the world on a new course ... I am asking you to lead."

More than 120 world leaders, including US President Barack Obama and British Prime Minister David Cameron, were expected to attend the one-day summit at the UN's headquarters in New York - aimed to be a forum for countries, cities and businesses to discuss nonbinding pledges and announce commitments to reduce the impacts of global warming.

The UN chief told attendees that the world needed "all hands on deck" and had never before faced "such a challenge, nor such an opportunity."

"We are not here to talk. We are here to make history," he added.

Germany is represented at the meeting by Environment Minister Barbara Hendriks and Development Minister Gerd Müller.

Toward a binding agreement

Tuesday's event is the first high-level meeting of its kind since the 2009 climate change conference in Copenhagen failed to result in any concrete commitments.

It's hoped the New York meeting will help build political momentum and prevent Copenhagen's failure from being repeated at negotiations to be held under the UN Framework Convention on Climate Change at Paris in late 2015. At that meeting, countries are expected to hammer out a global treaty to reduce greenhouse gas emissions beyond 2020 - when the Kyoto agreement expires.

Speaking in New York, Ban called for the world to be carbon-neutral by the end of the century, and urged governments and private institutions to invest in climate solutions to curb greenhouse gases, as well as implement measures such as emissions taxes.

President Barack Obama, who is scheduled to address the summit later on Tuesday, is expected to announce plans to sign an executive order requiring the US to consider climate change when it delivers aid to poorer countries. He is also expected to pledge more help in the way of funding, science and technology to countries struggling to address climate issues.

Ahead of the summit, mass protests were held in more than 150 countries over the weekend, with hundreds of thousands of demonstrators demanding leaders take action to tackle global warming.