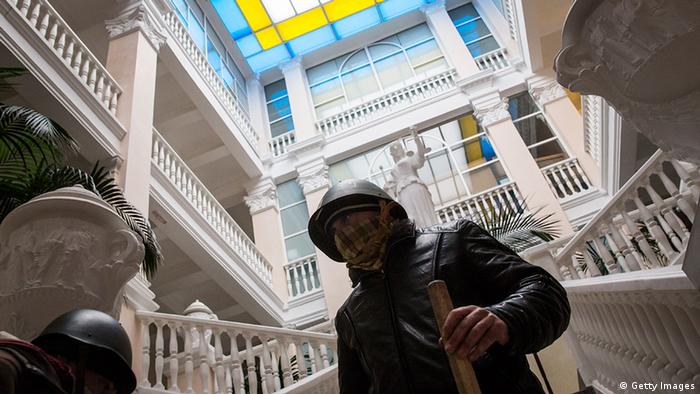 Television footage showed militant members of the pro-Western Euromaidan movement leaving the justice building in the centre of Kyiv on Monday. Masked activists with sticks and baseball bats still blockaded its front door.

Main opposition leaders such as boxer-turned-politician Vitali Klitschko had previously distanced themselves from militant occupations.

Opposition activists claim to have seized administrative buildings in ten of Ukraine's 25 regions, mainly in the Ukrainian-speaking west.

Similar attempts in two industrial centers in Yanukovych's eastern power base were reportedly thwarted by police on Sunday.

The European Commission said EU enlargement commissioner Stefan Fuele would return to Ukraine's capital "to help find a way out of the crisis."

Fuele had visited Kyiv on Friday and Saturday for talks with President Victor Yanukovych and members of the opposition.

Doctors quoted by Reuters said injured anti-government protestors were avoiding Kyiv hospitals and opting for field clinics run by volunteers. Half of those hurt had head and face injuries from clashes with police.

Oleksandr Danylyuk of the Common Cause movement, whose members vacated the justice ministry, said they instead mounted blockades around all central government buildings in Kyiv.

The German news agency DPA quoted him as saying that Justice Minister Yelena Lukash would be allowed to re-enter only after the release of arrested activists.

Foreign Minister Leonid Kozhara said a threatened emergency rule issued by the government of President Viktor Yanukovych was on Monday "not on the table."

Klitschko and fellow parliamentary opposition leaders Arseniy Yatsenyuk and Oleh Tyanybok said Monday they were ready to continue talks with Yanukovych to seek a political solution.

On Tuesday, Ukraine's parliament will discuss the protestors' demands, including their call for the government's resignation.

Opinion: Yanukovych is on the defensive

While attempting to divide the protest movement, Ukraine's president, Viktor Yanukovych, has come under increased pressure himself. Only early elections can solve the national crisis, believes DW's Bernd Johann. (26.01.2014)