A group of women's rights activists in Ukraine regularly bare their breasts to protest a host of issues. Their topless demonstrations garner international attention, but provoke criticism within feminist circles. 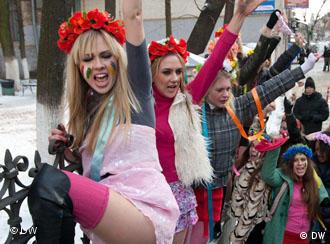 The Ukrainian women's rights group Femen regularly resorts to staging topless demonstrations - no matter whether it is raining or freezing cold outdoors.

But she stressed that the ultimate goal was to protect human rights in the entire country. "We are defending our rights and want women to take an active role in fighting for them," she said.

The movement, which was founded three years ago, has about 300 members in Kiev alone. One of the 30 women willing to bare their breasts during public appearances is economist Olexandra Shevchenko, who has denied that the women strip merely to show off their breasts.

"We want people to see our breasts and then read the slogans we've written on our posters and banners," she said.

Femen's members have targeted sex tourism and domestic violence in Ukraine - but their eye-catching protests do not always meet with other feminists' approval or support. 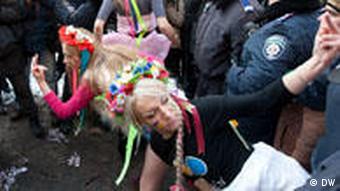 "Femen's activities give the impression at home and abroad that Ukrainian feminists are rabid women who show off their breasts," the head of the women's organisation 'Women's Network', Lajma Hejdar, said.

Sex tourism to Ukraine is in fact a problem, and it is on the increase as the 2012 European Soccer championship draws closer, according to Oksana Kis, a social scientist from Lviv. But, she says, the Femen activists discredit the most honorable ideas by the way they act.

"They take off their clothes for too many random issues, including the spread of swine flu," she told Deutsche Welle.

Other activists claim the movement portrays an undesirable image of Ukraine.

"Our country is like a giant distorting mirror, everything becomes unrecognizable," said Aljona Semenova, a gay rights campaigner. "These young women, who use their naked body to protest against all sorts of things, distort feminism in Ukraine."

But Huzol is convinced that the bare-breasted protesters have become a symbol for Ukraine, like the Klitschko brothers or soccer player Andrij Schewtschenko.

She adds that Femen also enjoys international backing and has received many letters of support from abroad.

"Contrary to those boring women who argue that we are harming Ukraine's standing, people abroad understand how cool it is to have such a movement in our country and that it is strong, courageous and effective," she said.

The number of women who join the Femen movement, meanwhile, has been on the rise. The women self-finance their protests - mainly by selling Femen souvenirs.

Even after 100 years, gender inequalities persist across the world, particularly in South Asia, where many women face discrimination for religious and cultural reasons. (07.03.2011)

Women's rights still have some way to go in Afghanistan

The Afghan constitution guarantees men and women equal rights. But the everyday reality in Afghanistan is very different. Some local NGOs are determined to improve the lives of Afghan women. (23.12.2010)

Pakistani lawyer and human rights activist Asma Jahangir is the recipient of this year's UNESCO/Bilbao Prize for the Promotion of a Culture of Human Rights. (10.12.2010)