A Ukrainian lawmaker once held by Russian authorities has lambasted the government for failing to end the civil war. Nearly 9,500 people have been killed after pro-Russia rebels launched an insurgency in eastern Ukraine. 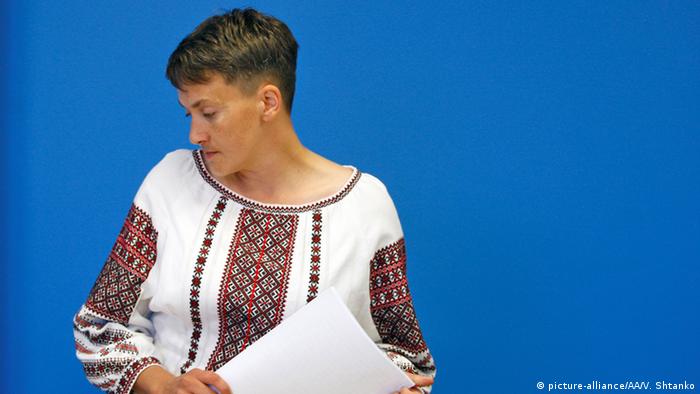 Ukrainian servicewoman-turned-lawmaker Nadiya Savchenko on Tuesday launched a fresh hunger strike in response to the government's inaction at securing the release of Ukrainian prisoners of war held by Russia and rebels.

'Ukraine is paying for Europe's freedom'

Sanctions against Russia should be directed toward individuals, says Ukrainian fighter pilot and parliamentarian Nadiya Savchenko in an interview with DW.

"I suggested concrete actions to the president of Ukraine - we need to start initiating the handover of people," Savchenko said at a press briefing.

"As of today, I again announce a hunger strike in response to the inability of all those in power the world over to release Ukrainians from captivity," she added.

During her detention by Russian authorities, Savchenko launched several hunger strikes to protest charges filed against her, which she described as a "lie."

In March, a Russian court sentenced the 35-year-old Ukrainian pilot to 22 years in prison for allegedly killing two Russian journalists in eastern Ukraine. However, the evidence used against her was often contradictory.

Russian President Vladimir Putin pardoned her in May, citing "humanitarian concerns," although Kyiv provided two Russian servicemen in exchange for her release.

'Not one chocolate factory'

Since her return to Ukraine, Savchenko has criticized Ukrainian President Petro Poroshenko for failing to end a 27-month conflict in the country's east, which has claimed nearly 9,500 lives and affected more than half a million children, according to UN figures.

"Not one chocolate factory has been turned into a bullet factory," Savchenko said Tuesday, referring to Poroshenko's confectionary business.

The release of all prisoners of war is one of the terms set out in the 12-point Minsk peace deal brokered between Kyiv and pro-Russia separatists in February 2015. However, the agreement has largely been ignored by the both sides of the conflict.