Vitali Klitschko, Ukraine's boxer-turned politician, has said he will not contest snap presidential elections in May. Instead, he is giving his support to businessman Petro Poroshenko. 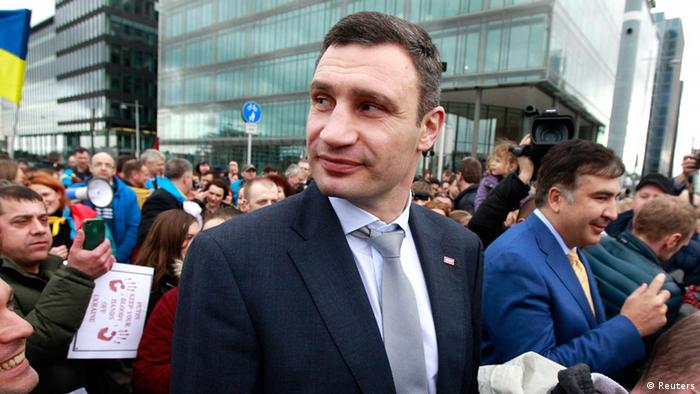 Klitschko told a congress of his UDAR (Punch) party on Saturday that he would not be taking part in the race for Ukrainian president, and instead back the billionaire confectionary oligarch Petro Poroshenko in his candidacy.

"We have to nominate a single candidate representing the democratic forces," Klitschko said. "This had to be a candidate who enjoys the strongest public support. Today, this candidate in my opinion is Petro Poroshenko.".

Klitschko however said he would run for mayor of Kyiv in elections on May 25 held alongside the presidential vote. Klitschko had sought this position before, coming second in the 2006 mayoral race after his first retirement from boxing.

A former heavyweight champion, Klitschko was a prominent and popular figure during street protests in Kyiv that toppled pro-Russian President Viktor Yanukovych on February 22.

In December, he enjoyed the support of more than 20 percent of potential voters, but a recent opinion poll has shown him as second in the presidential ratings with less than nine percent of the vote compared with Poroshenko's almost 25 percent.

Klitschko's withdrawal sets up a contest between Poroshenko - known as the "Chocolate King" - and former prime minister Yulia Tymoshenko, who announced her candidacy on Tuesday.

Poroshenko, 48, officially submitted his candidacy to the election authorities in Kyiv on Saturday.

Both candidates have said they will strengthen Ukraine's armed forces in view of what theWest sees as a threatened Russian incursion into eastern Ukraine, with Russia currently holding forces in Crimea and also near the border with eastern Ukraine, where many Russian speakers live.

Russian Foreign Minister Sergei Lavrov on Saturday however tried to allay such fears, saying Russia had "no intention" of ordering its armed forces into Ukraine.

"We have absolutely no intention and no interests in crossing the Ukrainian border," Lavrov told Russian state television, apparently ruling out an invasion of mainland Ukraine after Moscow's recent seizure of Crimea.

Lavrov also said that Moscow saw federalization, with every region having a degree of autonomy, as the best solution for Ukraine, and that the West had shown openness to the idea.

"They are listening. I can say that a federation is far from being a forbidden word in our talks," Lavrov said.