Kyiv has aired footage of two men that officials have called Russian soldiers captured in the midst of fighting in the country's restive eastern regions. Moscow has insisted the men are no longer in the Russian military. 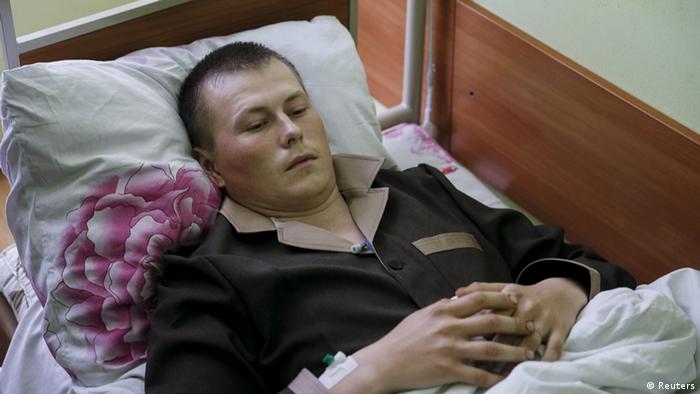 Ukrainian authorities on Tuesday showed the two soldiers said to have been captured two days earlier in a gunbattle in the separatist east, which Kyiv officials said proved Russia was directly embroiled in the war.

The two wounded men, who were recovering under guard at a Kyiv hospital, are now at the center of a public relations battle between the two countries. Ukraine hopes that showing a direct link between the Kremlin and pro-Moscow soldiers fighting in eastern Ukraine will strengthen its international case for more pressure on Russia.

Representatives of Amnesty International and the Organization for Security and Cooperation in Europe said they had visited the men and found them to be in reasonable condition. Reporters were granted access immediately after the visit.

"I got professional medical aid, surgery," said one of the men, who identified himself as Yevgeny Yerofeyev (pictured), a captain in the Russian army. "To my relatives, I want to say everything is fine with me, I'm alive and well."

"I'm missing my family and relatives so much," said the other, named as Sgt. Alexander Alexandrov.

Moscow said the men had been in the Russian military, but insisted they had been decommissioned from the armed forces before they entered Ukraine.

The Russian government has acknowledged the presence of "volunteers" and off-duty Russian servicemen in Ukraine's east, but rejects that they are there at the behest of Russian President Vladimir Putin or his generals.

A spokesman for the Russian Defense Ministry said that military command in Moscow intended to contact its counterparts in Kyiv with a demand to immediately return the captives.

Public trial for 'acts of terror'

Ukrainian authorities on Tuesday released interrogation videos in which the two say they were part of a force of about 200 men contracted to provide the Russian General Staff with information.

In video statements, both say they are members of an army brigade based in the Russian city of Togliatti and had been deployed in Ukraine for more than a month on a reconnaissance mission.

Kyiv authorities said they would put both men on a "public" trial for committing acts of terror and return them to Russia if they fully confessed.

Gennady Moskal, loyalist governor of the Luhansk region on the border with Russia, said four Ukrainian servicemen had been killed Tuesday. According to Moskal, separatists opened fire on government positions with mortar and artillery near the village of Katerinovka.