European Union foreign ministers have offered assistance to Ukraine - provided the country gets a new government. They stopped short of any immediate threat of sanctions. 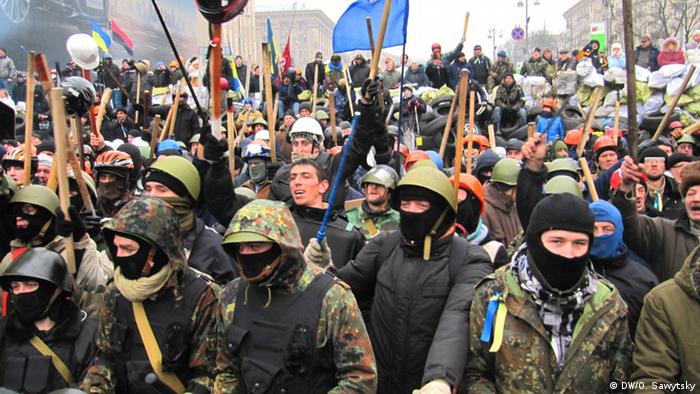 In a sharp rebuke to Ukrainian President Viktor Yanukovych on Monday, the European Union called for a new government and constitutional reforms that would pave the way to "free and fair presidential elections." Russia meanwhile reportedly plans to release the next installment of its $15 billion (11 billion euros) loan to the country at the end of the month, after effectively freezing the aid while Ukraine's opposition made gains.

According to a statement issued after the EU's 28 foreign ministers met, the bloc has followed the crisis "with deep concern" and grown "alarmed by the human rights situation." The statement called for dialogue to set up "a new and inclusive government" that would carry out constitutional reforms to give the parliament more powers and prepare for free and fair elections.

At the meeting on Monday, EU foreign policy chief Catherine Ashton briefed the ministers on her discussions last week in Ukraine with the opposition as well as with President Viktor Yanukovych.

The ministers reiterated that the EU stood ready to assist Ukraine financially. The bloc has so far shied away from imposing sanctions such as travel bans or asset freezes against the Ukrainian leadership, but the foreign ministers' demand for constitutional reform and fresh elections on Monday reflected the EU's growing impatience.

"We agreed that at this point there is no need to decide on sanctions," German Foreign Minister Frank-Walter Steinmeier said. "But if we see that Yanukovych and his people block a dialogue, then we will have to speak about sanctions."

Nearly three months of anti-government protests have hit Ukraine after Yanukovych refused to sign an agreement with the EU and accepted the loan package from Russia instead. The political deadlock has pushed Ukraine's economy closer to the brink: Its currency and foreign reserves have tumbled, and until now Russia had suspended its loan payments.

Also Monday, the Ukrainian activist Dmytro Bulatov, whose account of torture has shocked the international community, said that he dreamed of returning home to Ukraine, but has not yet decided to leave Lithuania, where he has undergone treatment. Bulatov also said that he would like to visit relatives in Germany.

"I dream of returning to Ukraine at the earliest opportunity but everything will depend on the situation there," Bulatov said in a statement to the news agency AFP. "I want to take a month to consider all my options about the future," he added. "I haven't decided anything yet."

On Monday, German officials said that they had granted the 35-year-old father of three a visa.