Babyn Yar was the site of one of the single biggest massacres of Jews by German Nazis. The movable structure of the new, folding synagogue recalls a book and is the first building in what will be a much larger memorial. 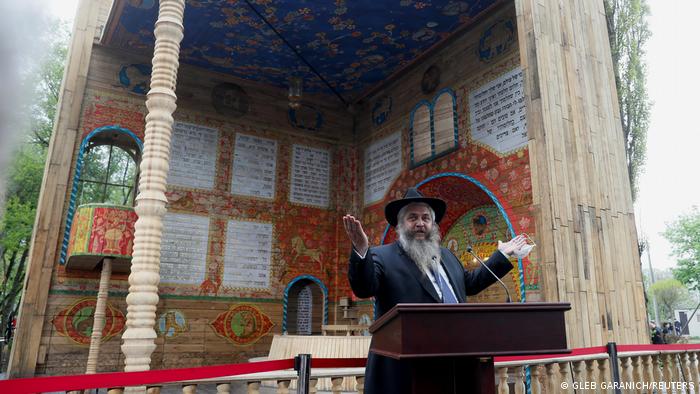 The wooden structure, which is designed to open and close like a book, marks the site of one of the worst single massacres of Jews during World War II.

More than 34,000 Jewish men, women and children were murdered at the Babyn Yar ravine outside Kyiv on September 29-30, 1941. Over the next three years, tens of thousands more Ukrainian resisters, Roma and disabled individuals were killed at the site. It is estimated that ultimately more than 100,000 people perished there, making it Europe's largest mass grave, according to the Babyn Yar Holocaust Memorial Center.

Friday's ceremony was attended by Ukrainian Prime Minister Denys Shmyhal. It coincided with the country's first "Day of Remembrance for Ukrainians who saved Jews during World War II."

The symbolic synagogue, designed by the offices of Manuel Herz Architects in Zurich, Switzerland, is the first building on what is to become a sprawling 370-acre (1.5 square-kilometer) Holocaust memorial site that will include a museum and research center.

The firm says the structure was inspired by a pop-up book, noting, "new worlds that we could not previously imagine unfold" when we open a book. The structure is indeed intended to be opened and closed by the congregation for use. 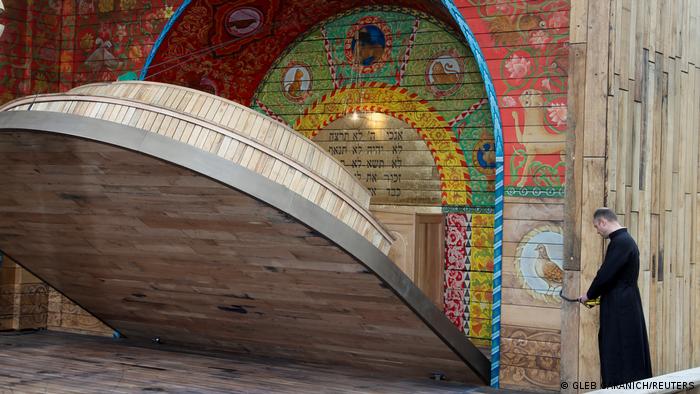 The small building is situated behind a menorah monument installed at the site in the 1990s after Ukraine became independent. It is adorned inside and out with religious texts and carvings, and the colorfully painted ceiling recalls the rich history of the ancient synagogues of western Ukraine. But beyond that artistic reference, the complex patterns painted on the ceiling also recall the night sky as it would have been seen on September 29, 1941, when the massacre began.

"This is the first real memorial that people can come to and feel like they are praying and memorializing the victims of Babyn Yar, especially the Jewish victims," said Rabbi Yaakov Bleich at its initial unveiling on Yom HaShoah (Holocaust Remembrance Day on the Jewish calendar), which fell on April 8 this year. "It is very striking, unique and moving. It was designed with a lot of thought and symbolism."

The walls of the building, which stands open to the elements when in use, are clad with 100-year-old oak planks salvaged from across the country, linking past to present. "It should be a tree that remembers the world before the Holocaust," said Babyn Yar artistic director Ilya Khrzhanovsky.

The Babyn Yar massacre marked the beginning of the Holocaust in Ukraine, which was then part of the Soviet Union. By 1945, almost all of the country's 1.5 million Jews had been killed. Israel honors 2,659 Ukrainians as Righteous Among the Nations for having saved Jews during that time.