Ukrainian and Russian troops have each been holding exercises amid Kyiv's fears of a Russian invasion. German Chancellor Angela Merkel has called for further sanctions against Russia if the situation deteriorates. 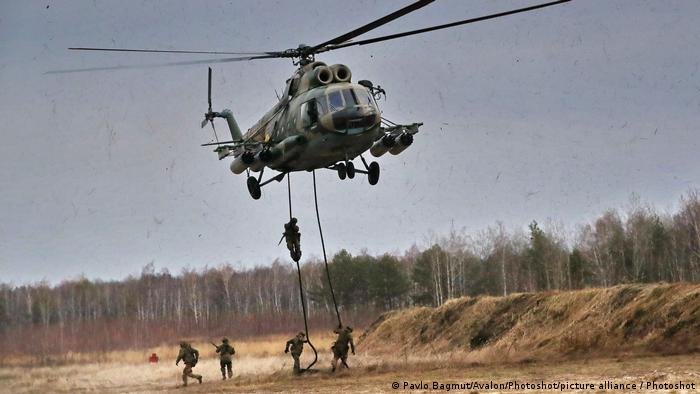 Ukraine fears a Russia is planning an invasion of its territory

Ukraine held further military drills at its borders on Thursday as it warned of painful consequences should Russia invade.

The Ukrainian military carried out tank drills in the eastern Donetsk region, it said Thursday, after holding a "special operation" involving 8,500 extra troops, drone exercises and anti-tank and airborne units at its border with Belarus.

Kyiv, which fears an invasion by Russia is imminent, suspects that Moscow may use the Belarusian border to stage an attack. It also fears being dragged into a similar situation to Poland, with Belarus encouraging migrants to rush the border.

Russia has deployed tens of thousands of its soldiers in recent weeks to the border with Ukraine, with the head of Ukraine's military intelligence accusing Russia of preparing for an attack by the end of January or beginning of February.

Ukrainian Foreign Minister Dmytro Kuleba on Thursday warned Russia that any attack would incur "political, economic and human losses" and would be too costly.

Kuleba told reporters that it was hard to guess what Russian President Vladimir Putin was planning, but that Kyiv was doing all it could to deter the Kremlin.

"We are trying to make him understand that he will pay dearly for a new attack on Ukraine," he said. "Moscow must clearly understand what political, economic and human losses it will suffer in case of a new phase of aggression. So it's better not to do it."

German Chancellor Angela Merkel said on Thursday that the European Union must be prepared to issue more sanctions against Russia if it escalates the situation in either eastern Ukraine or on the Belarus-Poland border.

Speaking alongside Polish Prime Minister Mateusz Morawiecki, she called for unity within the EU against Belarus's "weaponization" of migrants and Russia's deployment of troops at the Ukraine border.

"Any further aggression against the sovereignty of Ukraine would carry a high price," Merkel said. She said the preferable option was to defuse the situation.

Later Thursday, Merkel spoke with Ukrainian President Volodymyr Zelenskyy. His office said the pair agreed on the need for a unified response to Russian "threats."

On Wednesday, US President Joe Biden pledged his country's support to Ukraine, as he recalled the "deliberate" Stalinist famine that killed millions in Ukraine in the 1930s, in reference to the mass starvation known as the Holodomor.

Biden said, "The United States also reaffirms our commitment to the people of Ukraine today and our unwavering support for the sovereignty and territorial integrity of Ukraine."

Earlier this year, the US provided a large consignment of ammunition and Javelin missiles to Ukraine, which seeks NATO membership.

It has provoked Moscow's ire with shows of support through warship maneuvers in the Black Sea and delivery of US patrol boats to the Ukrainian navy. Russia also accused it of practicing nuclear bombing drills too close to its border on Tuesday.

Relations between Ukraine and Russia are essentially non-existent since the Russian-backed separatist takeover in eastern Ukraine that has led to the death of an estimated 13,000 people since 2014.

The Kremlin said it was "not exactly polite" of the US to accuse Russia of unusual military activity near Ukraine after Washington brought in American soldiers from overseas.