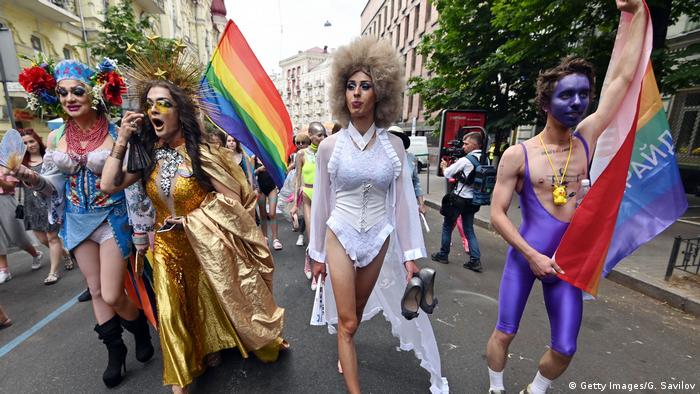 More than 8,000 people joined the Gay Pride procession through Ukraine's capital on Sunday, the biggest ever in the country's history.

"We go out to show that there are a lot of us and we have a lot of support," Ruslana Panukhnyk, director of the NGO KyivPride, which organizes the parade, told the Agence France-Presse news agency.

A group of soldiers in uniform from the war with Russia-backed separatists in the east also marched at the event. Viktor Pylypenko, who led the column of troops and veterans, said there were gay soldiers on the front lines who wanted to attend.

Police and members of the National Guard lined the streets to keep the peace as several hundred far-right and Orthodox activists staged a counterprotest nearby. Authorities said earlier they had arrested nine people on suspicion of preparing "provocations" against the parade.

"We are for God and Ukraine," Oksana Korchynska, a member of the opposition Radical Party, told the Reuters news agency from the counterdemo on Sunday. "For us it is important that people who have a sexual sin do not make propaganda out of it." 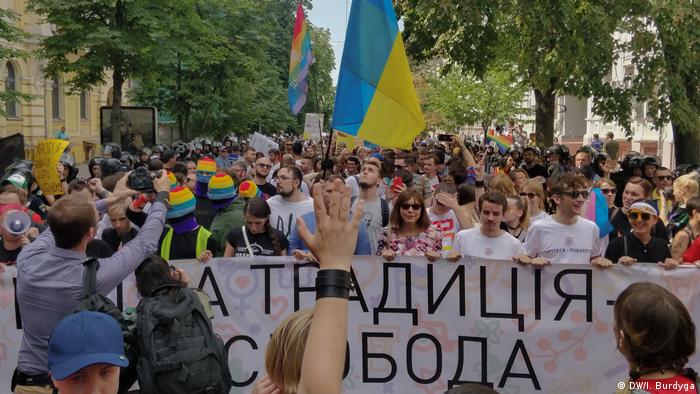 Sunday's march was the first since the election of Ukrainian President Volodymyr Zelenskiy. On Sunday morning, Zelenskiy's office urged the police to preserve the safety of protesters and pointed out that the country's constitution guarantees equality and freedom.

Several Ukrainian politicians and foreign diplomats also took part in the event. One of them, British Ambassador to Ukraine Judith Gough, wrote on Twitter: "Thank you to the police and other law enforcement agencies for protecting today's Pride event."

William B. Taylor, charge d'affaires at the US Embassy in Ukraine, wrote: "We stand with all Ukrainians striving for equality and non-discrimination."

Support for LGBT rights has grown in the former Soviet state since a Western-backed government came to power in 2014. But homophobic attitudes and attacks on gay people in Ukraine are still relatively common. Opponents of gay rights argue homosexuality goes against the country's traditional culture. 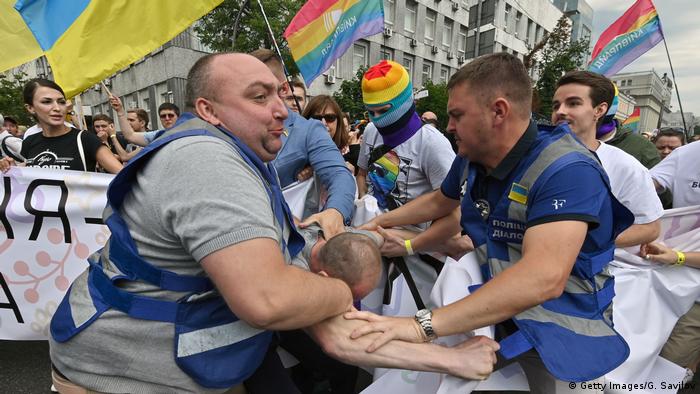 Besides minor scuffles with anti-gay activists, the parade was relatively peaceful

This year's march was relatively peaceful compared with previous years. Violent clashes broke out at the parade in 2015, while last year more than 50 nationalist activists were detained following scuffles.

Some 2,500 people have taken part in the "March of Equality" in downtown Kyiv, with the authorities deploying thousands of security forces to ensure safety. A group of ultranationalists attempted to disrupt the event. (18.06.2017)

Yet again, a member of Germany's far-right populist AfD party has traveled to the Russian-annexed Crimean Peninsula. This is a deliberate provocation of Ukraine and Germany's parliament, says DW's Jens Thurau. (19.04.2019)

A far-right paramilitary group threatened a "bloodbath" at the gay pride parade in Kyiv on Sunday. The activists won't be intimidated, however, and will be protected by police. (10.06.2016)