A worker at Ukraine's embassy in Germany has been arrested on charges of attempted smuggling of radioactive materials. 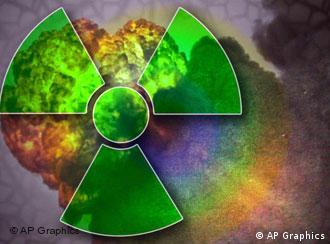 The suspects were found with radioactive material worth millions

The man and the security manager of a local bank were detained near the central Ukrainian city of Cherkassy with radioactive metals in their possession worth 3.1 million euros ($4.9 million), said police, as reported by the Interfax news agency on Monday, July 7.

According to reports, the two suspects had been transporting uranium and cesium in an automobile.

The confiscated radioactive elements were believed to have been removed from a special holding facility in the Ukrainian capital Kiev for sale to an organized crime group, according to the report.

The police did not make clear where the pair intended to transfer the materials.

As a result of the break-up of the Soviet Union, Ukraine inherited a massive nuclear arsenal and substantial reserves of radioactive materials including weapons-grade materials.

Kiev formally rejected the use or storage of nuclear weapons in 1994, but since then much of the country's atomic arms research and development infrastructure has remained operational, though nearly always underfunded and poorly-secured.

Slovakian police arrested three traffickers near the Hungarian border who were smuggling almost half a kilo (1 pound) of enriched uranium that could be used for making a "dirty bomb," officials said on Thursday, Nov. 30. (29.11.2007)

Chernobyl Reactor To Be Encased In New Metal Coffin

Ukraine has signed two deals to build new protective coverings around the remains of Chernobyl. An explosion at the nuclear power plant in 1986 caused one of the world's most disastrous nuclear meltdowns. (18.09.2007)