Opinions are divided in Ukraine regarding its democratic process. Is the country on the right track? What will its future look like? Two Ukrainians who have been active in politics offer their views. 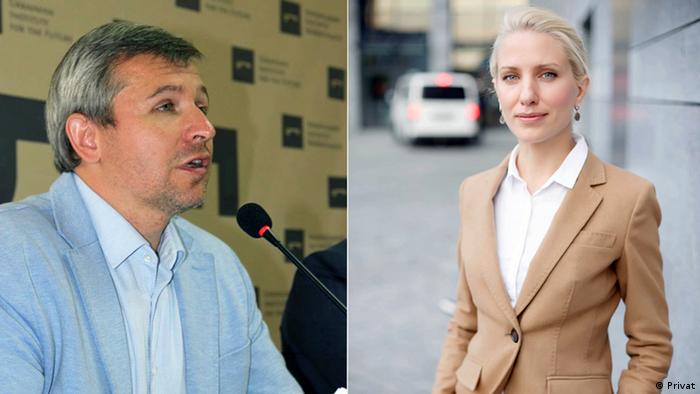 Following Ukraine's Orange Revolution in 2004/ 2005 and the Euromaidan demonstrations that began in November 2013, Ukraine's path towards democracy and European integration finally appeared to be a smooth one. Almost three years later, however, the initial euphoria has given way to frustration. The Ukrainian government is constantly accused of delaying its fight against corruption and of enforcing reforms. What, then, is lacking when it comes to democracy in Ukraine?

Kiev-based Svitlana Zalishchuk originally worked as a journalist and was head of the anti-corruption NGO "Center UA". Since 2016, the prominent critic of the former president, Viktor Yanukovych, sits as one of the heads of the new "Demallianz" (The Democratic Alliance Party) in the Ukrainian parliament.

Anatoliy Amelin is from Donetsk, a city in eastern Ukraine. He is an expert on economic and political issues and held several senior positions under former president Yanukovich, includig as head of the National Commission on Securities and Stock Market of Ukraine. He took part in the Maidan protests. Amelin has since left the public service but remains a committed political analyst and civil society activist.

In 1947, Winston Churchill described democracy as "the worst form of government, except for all the others". What does democracy mean to you?
Svitlana Zalishchuk: During our recent revolutions I began to understand what democracy is definitely not: It is not a free gift that politicians simply hand over to the people. To me, democracy is an effort by all of civil society. This is the only way - and it includes years of hard work - that we can develop strong state structures that guarantee freedom of the press, free elections and other human rights. 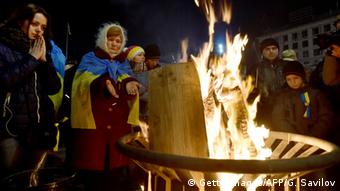 Anatoliy Amelin: To me, democracy means being able to actively influence how our country and society develop, and to establish a strategy that we are responsible for. This combination of responsibility and rights is complicated one. In our country, many people confuse "democracy" with "ochlocracy" [rule of the mob, editor’s note]. In Ukraine, we might not yet have a democracy in the classical sense, but we are on the right track.

Still, two and a half years after the Maidan protests, Ukraine and its society are still struggeling with the past. Do you think the country is really striving towards a democracy as you define it to be?
Svitlana Zalishchuk: I think Ukraine is determined to follow its chosen path - towards European integration and democratization. There are clear indicators for this: for example, free elections have been carried out successfully several times now. There are certainly still problems, but we have managed to evolve from a "vertical" to a "horizontal" society, where citizens can criticize, control and vote. The latest corruption scandals have shown that you can no longer get away with lies, thievery and corruption. Freedom of speech and political diversity are on the rise, the country is developing an entirely new political culture. 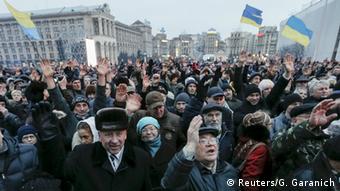 Protests in the Maidan in February 2016

Here's a provocative question: Authoritarian regimes can easily and quickly implement decisions and reforms. Could Ukraine, for example, follow this route for a while and then return to a democracy after the reforms are in place
Svitlana Zalishchuk: No. Ukraine has been on its way to democracy for years now, ?and there's no alternative. We are a European country. We have democratic traditions and culturally, historically and politically we see ourselves as part of the European democratic process. I don't believe that dictatorships can provide sustainable reforms. But of course, it’s a fact that authoritarian regimes can make quick decisions and implement them effectively…

There are successful examples, such as Singapore…
Svitlana Zalishchuk: Yes, but they have to be seen in the context of their local mentality and their historical and geopolitical framework.

Anatoliy Amelin: I agree. Authoritarian governments are also heavily dependent on their leader's personality. If there were a similar leader in Ukraine, we could at best become a European Singapore. In the worst case scenario, we might become a European North Korea.

The recent reviews of the reform efforts in Ukraine have been very critical, especially in regard to the fight against corruption. Transparency International's Corruption Perception Index 2015 ranked Ukraine at 130 out of a total of 168 positions.
Svitlana Zalishchuk: I don't see the situation in Ukraine as nearly as black and white as that. So much has been achieved over the last two and a half years! Dozens of progressive laws have been adopted and implemented. The newly established anti-corruption institutions have already begun to demonstrate their effectiveness. 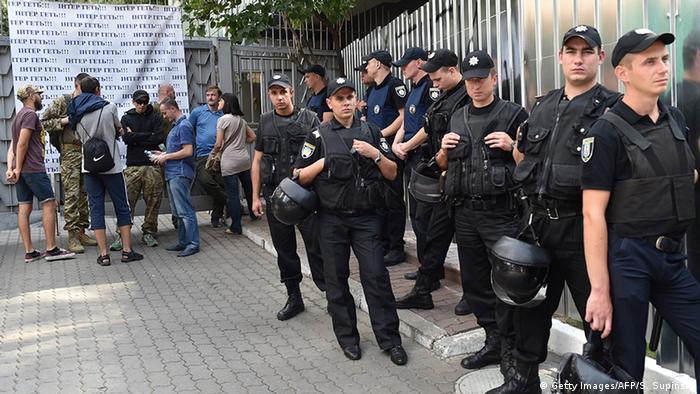 Activists block the entrance to Inter TV that they accuse of being pro-Russian. September 2016

Press freedom was also found to be lacking. Why does Ukraine find it so hard to develop and appoint journalists as watchdogs of democracy?
Anatoliy Amelin: We don't have the tradition of an economically functioning media market. The outlets' financial resources are usually provided by the owners. So for this, they have to pursue their interests and serve as their protective shield.

Svitlana Zalishchuk: It's true that private television in Ukraine belongs to individual oligarchs, but in Western Europe there’s also more than just public broadcasting. The commercial TV stations belong to rich individuals, too…

…but are prohibited from using their media to exert political influence.
Svitlana Zalishchuk: That's exactly what I wanted to say. The problem is not that the outlets are owned by rich individuals, but that they are politically abused. I'd like to stress again that significant changes have taken place in the Ukraine within the last years, including in the media landscape. The one-sided information policy carried out by the former presidential administration no longer exists. We're observing increasing competition between the media, and an emerging new generation of young journalists who want to work freely and independently.

Would you say that Ukrainians have already internalized the values of democracy, or is their understanding of democracy still quite superficial?
Anatoliy Amelin: We've hardly had an opportunity over the last 70 years to set us apart with democratic values. Our indepedence is a prerequisite, but the current political elite and heads of schools and universities were educated under the Soviet system. Given this, real democracy can only develop slowly. But I think that's quite normal. Moses took 40 years to lead his people out of the dessert; our independence was only declared a generation ago. 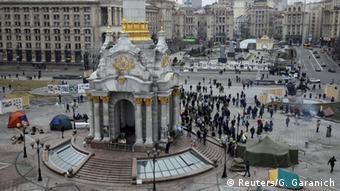 Svitlana Zalishchuk: I think it's unfair to say that Ukrainians might only have a superficial understanding of democracy. In recent years, Ukrainians have proven repeatedly that they are willing to take to the streets for their values and to even die for them. This can hardly be described as superficial. But we're talking about a transformation of the whole society. Something like this never happens quickly and smoothly. So it may take time before we have truly internalized the values of democracy.

Which steps do you think should be taken to further promote the democratization of Ukraine, and to make the process irreversible?
Anatoliy Amelin: We need a fresh wind of change among public authorities and in the political sphere. The younger generation is less conservative and could quicken and inspire Ukraine’s transformation.

Svitlana Zalishchuk: For me, the top priority is reforming the electoral law system. By abolishing the majority vote and adopting open electoral lists we could encourage internal competition within the political parties. Next on the list would be economic reforms. A growing middle class is a prerequesite for devolping our democracy. For this we need tax incentives and new investments. And the fight against corruption needs to continue instead of being blocked by the law. And when all this is done, everything will be fine in Ukraine (laughs).

We've talked a lot about Ukraine’s long way to democracy. At what point would you say that democracy has been achieved?
Anatoliy Amelin: I think we'll have achieved democracy when the Ukrainian state stands up for the interests of its citizens - and not the other way around.

Svitlana Zalishchuk: I'm convinced that democratization is a process, and not a goal to be met. I've observed that even Western democracies in Europe and the US are facing severe challenges in their development. No, for me the democratization of Ukraine is not a destination, for me it’s a journey.