A journalist with dual Russian-Ukrainian citizenship has been charged with treason in Ukraine. Authorities raided the offices of RIA Novosti the Russian state-run news agency. He is expected in court on Thursday. 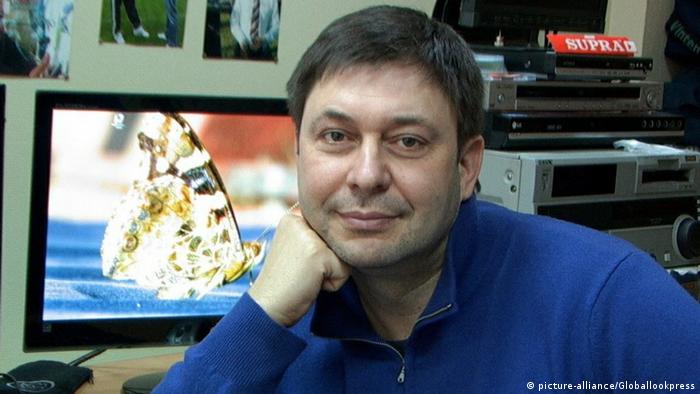 Moscow called Wednesday for the release of a Russian journalist detained in Ukraine for treason, and condemned Kiev authorities for what it said was a repressive policy against the media.

"Russia will do everything to ensure its citizen is freed, and to prevent other journalists finding themselves in similar situations, whether they are Russian citizens or work for Russian media" foreign ministry spokeswoman Maria Zakharova told a press briefing.

Kyrylo Vyshynsky, a dual Ukrainian-Russian national citizen who works for Russian state-run news agency RIA Novosti, was detained in Kiev on Tuesday. Officials said he would be charged with treason for his "subversive" reporting to justify Moscow's 2014 annexation of Crimea.

They also said Vyshynsky later collaborated with separatist groups in eastern Ukraine, where a conflict that broke out following Crimea's seizure has cost some 10,000 lives.

Vyshynsky's lawyer Andriy Domansky said the journalist had been transferred to the southern city of Kherson, where he is expected to appear in court of Thursday.

Speaking to the French news agency AFP, Domansky said that Vyshynsky "considers what happened to him as a provocation, persecution. He doesn't admit what they alleged against him."

Zakharova accused Ukrainian authorities of a "repressive" policy against the media and expressed Russia's "indignation at the brutal violations of the freedom of the press in Ukraine."

The Kremlin, which had immediately condemned the journalist's arrest as "outrageous and scandalous," reiterated on Wednesday that Russia would respond. Kremlin spokesman Dmitry Peskov said that Ukrainian journalists working in Russia had nothing to fear.

"During all these difficult years Russia has never constrained your professional activities... Unfortunately our journalists working in Ukraine can't claim such treatment," Peskov told a press briefing.

Both the EU and United States have said that while Ukraine has the right to protect its national security, it must respect legal and human rights.

"The EU attaches the highest importance to the freedom of expression and of the media," a spokesman told AFP.

However, national security measures "must be done in full respect of fundamental rights and freedoms, including the European Convention for Human Rights," added the spokesman.

In the US, State Department spokeswoman Heather Nauert said on Tuesday that a lot of countries have concerns about the reach of Russian propaganda, but that "the arrests of journalists or searches taken of media outlets, if that is done, it has to be done in accordance with the law."

The Council of Europe said it "is concerned about the implications that repeated detentions of journalists may have for the situation of media freedom in Ukraine" and would follow the situation closely.

Journalist Arpad Soltesz says press freedom in Slovakia is on a downward spiral after the killing of investigative reporter Jan Kuciak. He spoke to DW about his concerns, and told his own story of being attacked. (01.05.2018)

International rights groups criticized the case as emblematic of deteriorating press freedom in Turkey. Cumhuriyet is one of the newspapers critical of Turkish President Recep Tayyip Erdogan. (25.04.2018)

An Azeri journalist who sought asylum in France after being imprisoned for criticizing Azeri politics has been shot. Azerbaijan is ranked 162 of 180 countries on the Reporters Without Borders 2017 Press Freedom Index. (30.03.2018)