Kyiv lawmakers have approved plans to fight corruption in the legal system, as part of reforms promised to its backers. Judges will face limits to their immunity from prosecution and be appointed independently of MPs. 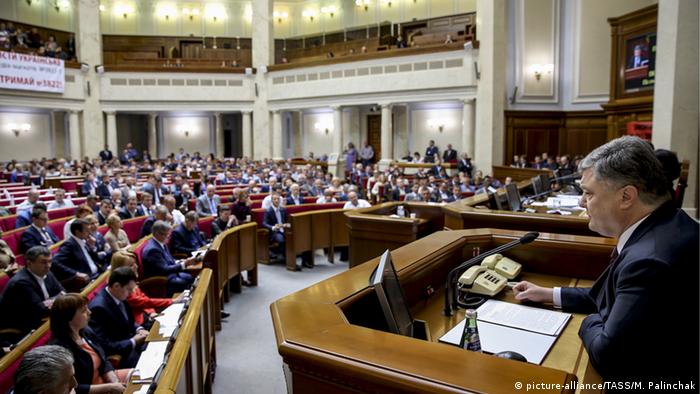 A raft of reform measures was approved Thursday by 335 lawmakers, 35 more than needed to change the constitution, in the first constitutional vote since a new government was put in place in April.

The legislation will see Ukraine's long-criticized legal system adopt Western standards, including limiting the immunity of judges and establishing an anti-corruption court.

Bribery in the court system is seen as a major obstacle to Ukraine's broader reform effort under a $17.5 billion (15.7 billion euro) International Monetary Fund bailout program and the changes will likely assist the government in its application for EU membership by 2020.

Foreign investors have complained that the judicial system is an obstacle to international investment and benefits political interests tied to a handful of powerful tycoons.

Under the new system, judges will be selected by a new independent panel based on their professional merits instead of their political or business ties.

Ukrainian President Petro Poroshenko said more than 40 percent of current court members would not qualify under the new ethics system.

"We are restoring Ukrainians' right for the truth, the right for justice," Poroshenko told lawmakers shortly before they almost unanimously approved the measures.

But some politicians, including the servicewoman Nadiya Savchenko, who returned home last week after spending nearly two years in a Russian jail, have criticized the new law.

In an emotional appeal she asked the parliament to keep its hands off the constitution "or else the country will blow up like a hand grenade."

Earlier this year, the latest in a long line of political crises erupted when senior members of the government resigned over alleged backroom deals determining key appointments and legislation.

Former Prime Minister Arseniy Yatsenyuk stepped down and was replaced by parliament speaker Volodymyr Groysman, who has vowed to more strongly pursue the reforms by Ukraine's main backers, the United States, the European Union and the International Monetary Fund.