UKIP′s Farage battles for his future in South Thanet | Europe | News and current affairs from around the continent | DW | 06.05.2015

UKIP's Farage battles for his future in South Thanet

Nigel Farage has said he's "putting it all on the line" in the Kent constituency. Either he wins the South Thanet seat in parliament, or he'll quit the UKIP leadership. Mark Hallam reports from Ramsgate. 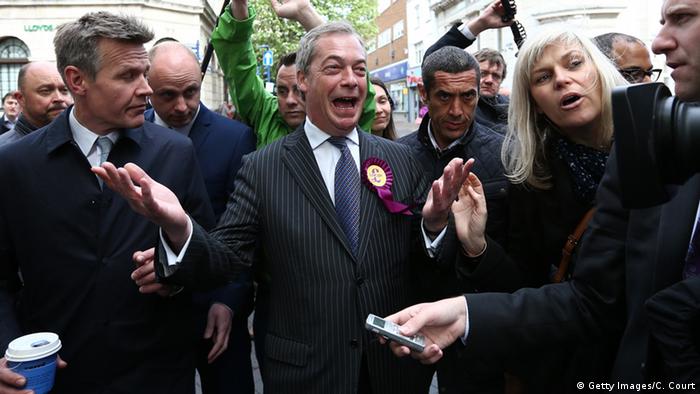 "Afternoon everyone, all ready for the revolution?" A man in his 40s orders a pint of bitter beer on the Ramsgate seafront then wanders over to make conversation with four other men, several looking a little older than him.

"The revolution" is a reference to UKIP leader Nigel Farage, candidate for this somewhat forgotten constituency in the southeast of England.

Farage's own book is called "The Purple Revolution," after UKIP's primary party color, and in it he's very clear: either he will win his first ever Westminster seat on Thursday in South Thanet or he will give up the leadership of the United Kingdom Independence Party. Farage, a former Conservative, founded UKIP back in 1993.

The moment of truth is near, and if nothing else, Farage's candidacy has brought attention to a rather run-down part of the UK. The arduous train trip from London - covering just 125 kilometers (80 miles) - takes two hours to complete.

The first signs that this is no ordinary week on the coast of Kent county are apparent at the tiny Ramsgate train station. Two camera crews crowd the coffee shop, reviewing footage. On stepping outside the station, a radio reporter is on a desperate hunt for local voters. 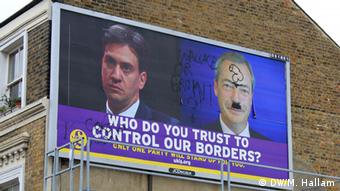 Farage enjoys much support in Ramsgate, but not everyone agrees with UKIP's platform

Heading towards town, a UKIP poster declares "only one party can control our borders." But it's the rather rude graffiti defacing Farage's image - including a toothbrush Hitler moustache - that truly catches the eye. Some houses carry party or candidate endorsements in their windows, but the majority do not. On show, for the most part, is the color purple, and Conservative blue.

Craig Mackinlay, the Conservative candidate, seems to be Farage's only real rival for Thursday's vote - and the race is on a knife's edge with polls showing Mackinlay gaining ground and possibly even just ahead of Farage.

The base of operations

UKIP's election headquarters in Ramsgate, despite its central location, is relatively quiet, considering there's just 24 hours to go until the election. A wary youngster by the door pointedly asks me, "and who are you?" before calling John, a press officer boasting a warmer facial expression.

"Nigel's gathering his strength," John said. There was the morning campaign trail stump already and "one last big push" up the road in nearby Broadstairs on Wednesday evening. It's for supporters, selected press members, and undecided voters, John effused. 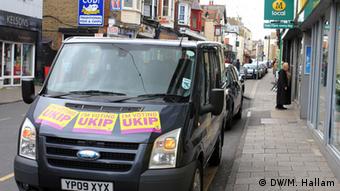 UKIP's base of operations in central Ramsgate was busy, but by no means flooded on election eve

Does Farage have anything to add about Robert Blay? Blay is the latest UKIP member to be suspended for overtly xenophobic on-camera comments. But all the press officer will let out is that I could ask around in Broadstairs later on. Blay was hugely disparaging of a Conservative candidate, an ethnic Tamil, when talking to the "Daily Mirror," saying Ranil Jayawardena was "not British enough to be in our parliament" and that he would "put a bullet between his eyes" if Jayawardena ever became prime minister.

Between the bookmakers and the chippy

Two key clippings from the "Daily Express" newspaper can be found next to campaign material in the purple-heavy UKIP offices. The right-leaning daily, generally a Conservative supporter, surprisingly threw its lot in with UKIP in the run-up to the vote - the "Express'" owner, Richard Desmond, also donated 1 million pounds ($1.5 million, 1.34 million euros) to the party, the maximum permitted in English elections. 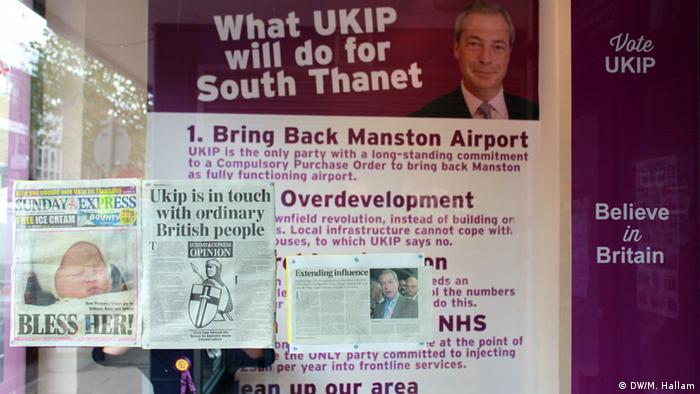 "Why you should vote for Nigel Farage," one headline reads. Behind the newspaper cuttings, looking through the office window, UKIP's own placard of regional promises can be seen.

Standing up to UKIP

A block away, half a dozen people hold leaflets and approach members of the public.

Nick, curly-haired and in a red hoodie, looks to be in his early 30s. He said he's come to Ramsgate several times in the past month - traveling about two hours each way. But in a fib to bolster his local credentials, he admitted to telling passers-by "I'm from Kent" - a reference to where he grew up but not his current residence.

After a few minutes, Nick turns uneasily and gestures to a tall gentleman with a classic buzzcut.

"You see him? He's UKIP. He's been shouting at us, on and off, all day now," Nick said. "Although, he's actually from the Netherlands, which I never quite understood!"

Handing out material here isn't always easy, Nick said, "We have to be careful." Several members of the public have taken umbrage at the activists' appeals, he said, usually thinking that they are being accused of racism. 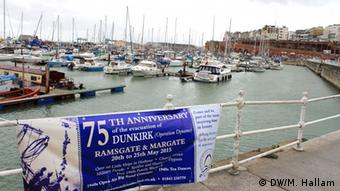 Ramsgate has seen better days, and the anti-EU line can play well among the struggling fishing community

At an April rally, the "Stand up to UKIP" group was attacked in Ramsgate - by fascist activists with ties to UKIP, group members have said. Farage's party has denied the accusation.

Nick said he thinks that a big part of UKIP's rise in popularity is the lack of choice for British voters. "So many people are dissatisfied with the big three parties," he said, adding that millions of people are looking for a protest vote.

He himself intends to vote Green - meaning it's just as well he's not a South Thanet voter. That ballot would do little against Farage. It's perhaps telling that even the Green candidate, Ian Driver, shared this news article with his Twitter followers in the run-up to the election.

Polls do show Mackinlay of the Conservatives is best placed to best career euroskeptic Farage - but on the waterfront, Labour party volunteers in the office say their candidate, Will Scobie, has no intention of encouraging tactical Tory votes.

"I really might have considered it," said a woman wearing a Labour-red cardigan, "but the problem is the Conservative candidate's a former UKIP member himself." 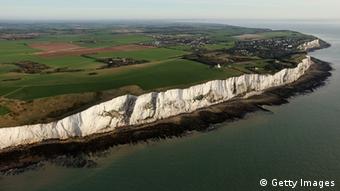 Could Farage's 'Purple Revolution' be set to tumble off the legendary 'white cliffs of Dover?'

Could putting up a candidate with purple credentials of his own be an intentional move by the Conservatives to win votes? The woman in red looks to the ground, before her colleague admits with a smile, "We were expecting a different rival candidate until quite late in the day."

South Thanet has been a bellwether in recent years - in 1997, it mirrored the UK as a whole by ousting the Tories and voting in Labour. Then, five years ago, the Conservatives reclaimed the constituency with a massive majority.

A win here would take the Tories one key seat closer to its majority. Two months ago, it seemed an impossibility - but the very same focus Farage has brought to this sleepy region by running for office could ultimately end up bringing his own "Purple Revolution" to an abrupt end.

On Friday morning, the British will wake up to a changed political landscape. That much is certain. But in the most unpredictable race in generations, everything else is up for grabs. Mike Power reports from London. (06.05.2015)

How many seats do the Conservatives and Labour need to avoid a coalition? Why is everyone talking about the Scottish National Party? Can UKIP expect MPs? All this, and more in DW’s numerical tour of the British ballot. (05.05.2015)