New research seeks to bolster the theory that not everything a black hole consumes automatically stays trapped forever. The potential for information to escape could challenge the notion of a "point of no return." 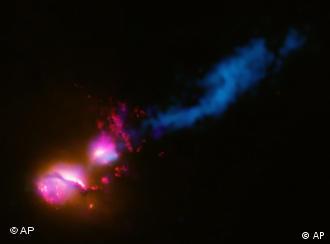 Scientists are taking a new look at black hole physics

The black hole is known as nature's hungriest beast, a bottomless pit that eats up everything in its path.

Yet physicists at the University of York say they have lent fresh support to the notion that these all-consuming entities might not be as air-tight as once thought.

The study, published in the latest issue of the journal Physical Review Letters, suggests it is not impossible for information to break free from the void.

It's not the first time that researchers have considered the potential of an information leak - yet this study approached the topic in a "spacetime-free manner."

"We haven't yet proven that information escapes from black holes, but we have more evidence supporting that position," Samuel Braunstein, one of the paper's authors, told Deutsche Welle.

"This also adds support for more 'bizarre' ideas - that maybe things like gravity and even space and time aren't fundamental." 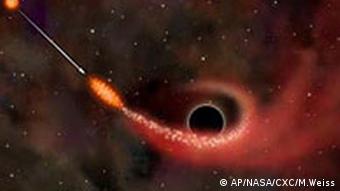 Black holes are thought to suck in everything around them

Established theory holds that gravity is the major driver behind the "space-bending" abilities of black holes. But Braunstein and his colleague, Manas Patra, theorized that gravity might not even be a fundamental force of nature.

"If it can be derived as an emergent phenomenon, then gravity is not a fundamental force of nature," Patra told Deutsche Welle. "It's coming out of something else."

Scientists have thought the opposite since the time of Sir Isaac Newton, who developed the theory of universal gravitation - but Braunstein said there's still no standard theory on the subject.

"Getting gravity to fit into the overall picture is always difficult," he added. "There isn't really a successful theory of quantum gravity."

This idea was based on research conducted more than a decade ago by Ted Jacobson, who argued that not gravity itself, but Albert Einstein's equations - which form the basis of general relativity and how things move in a gravitational field - could be derived via thermodynamics.

Key in the University of York team's approach was that instead of focusing on gravitation, the researchers looked to the theory of light and atoms: quantum mechanics.

"The key discovery we've made is that when it comes to calculating black holes, you can throw space and curve theory and mathematics out the window," Braunstein said.

"We just use elementary quantum mechanics."

But the definition of a black hole as an irreversible eating machine is based on gravitation theory, not quantum theory. The very edge of the black hole is known as an "event horizon," or the "point of no return." It is thought that once something passes that point, there's no going back.

"If you apply quantum theory, then there are always quantum fluctuations," Patra said, which opens up the possibility that information would re-emerge.

Patra acknowledged that not everyone subscribed to the theories mentioned in the study - he cited a paper by Erik Verlinde written last year, which serves as the backbone for the latest report.

Verlinde suggested that thermodynamics might be the source of gravity, inertia, "and even space time," according to the authors.

"That created a bit of a stir," Patra said.

Jacob Bekenstein, a scientist at the Racah Institute of Physics at the Hebrew University of Jerusalem, said that the notion that black holes release information is nothing new.

He described Verlinde's theory on the connection between gravity and thermodynamics as more "obscure," but nonetheless a popular point of discussion.

"It's a bandwagon right now that people discuss this approach," Bekenstein added.

Braunstein acknowledged that Verlinde's research was controversial but "tantalizing."

"I think it's fair to say that if what Verlinde had claimed was true was indeed the case, than something along the lines that we found would have to be true."

Physicists at the European Centre for Nuclear Research (CERN) in Geneva, Switzerland, slam together sub-atomic particles with a level of energy never before achieved. (30.03.2010)

A team of German scientists say they have come across compelling, new proof that a black hole of unimaginable dimensions is at the center of our galaxy. (15.12.2008)