The baby boy was born just days after the UK's leader returned to work after being hospitalized with the novel coronavirus. The name honors the two doctors who treated his dad. 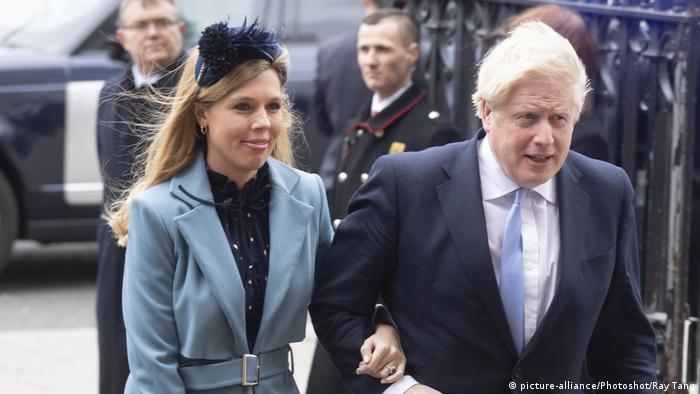 UK Prime Minister Boris Johnson and partner Carrie Symonds have announced the name of their newborn son, saying it was chosen to honor the doctors who treated Johnson while he was hospitalized with COVID-19.

The two doctors responded in a statement that they are "honored and humbled to have been recognized in this way."

Johnson was admitted to St Thomas' hospital in London, in early April after suffering from coronavirus symptoms. He spent a week in the hospital, including three nights in intensive care. The birth of his son came on April 29 —  just two days after Johnson returned to work following his hospitalization.

The child's other names "Wilfred" and "Lawrie" were chosen after Johnson's and Symonds' grandfathers, respectively, said Symonds.

Johnson was present for the birth but returned to 10 Downing Street — the official residence and the office of the British Prime Minister — within hours amid the ongoing pandemic.

Speculation grew around whether Johnson would take paternity leave. His office later confirmed he would take time off later in the year. In the UK, parents are eligible to take up to 50 weeks of leave for having a child, with up to 37 weeks paid.

The country has been struggling to keep control of the coronavirus pandemic, with its death toll overtaking Spain and France with over 27,500 deaths — just behind Italy.

The government has also come under fire for not carrying out widespread-enough testing, even when tests were available. But on Thursday, Health Secretary Matt Hancock announced the country hit its end-of-April target of carrying out 100,000 tests a day.

Britain has said it is "throwing everything" at efforts to develop the first vaccine to protect people from COVID-19. Scientists at Oxford are about to start human trials, hoping to have experimental doses by September. (22.04.2020)

The Queen is celebrating her birthday in somewhat muted style this year due to the COVID-19 pandemic. Ceremonial displays have been abandoned as the monarch deemed it inappropriate amid the pandemic. (21.04.2020)

US-Russian crew returns to Earth from ISS 11m ago

US intelligence: Russia and Iran actively interfering in election 3h ago