UK minister Fallon: 'Defense is for NATO and not the EU'

British Defense Secretary Michael Fallon has told DW that Britain's departure from the European Union will not compromise European security. He also reiterated London's view that a European army is unnecessary. 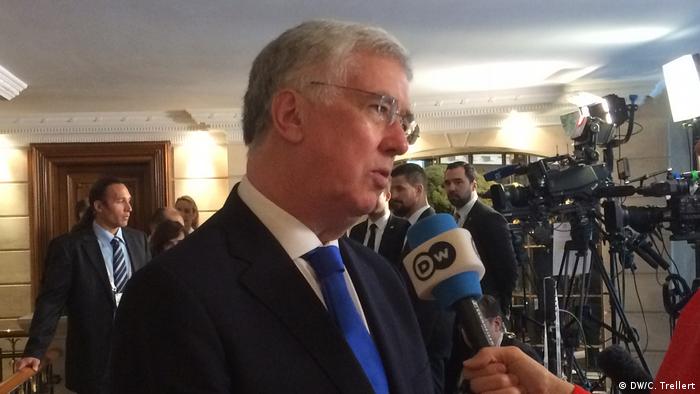 One army, 28 states, not an easy feat - and all that while the UK keeps its foot in the door of the EU, still keen to give its two-penneth. Dr. Jocelyn Mawdsley spoke to DW about the likelihood of an EU army. (27.09.2016)

The UK foreign secretary says Britain will not impede further EU security integration, as it prepares to leave the bloc. Johnson also conceded that Trump is right to broach other NATO members' spending contributions. (02.12.2016)

Germany and France are pushing for greater cooperation at a meeting of EU defense ministers in Bratislava. But despite its vote to leave the EU, Britain is threatening to block their ambitions. (27.09.2016)

UK 'will oppose any idea of EU army' despite impending Brexit

British Defense Minister Michael Fallon has vowed to veto all EU plans for increased military cooperation that could interfere with NATO. The UK is due to begin its departure from the EU within a matter of months. (27.09.2016)

Britain's impending departure from the European Union has created additional uncertainty surrounding the issue of European defense. The remaining 27 EU member states are asking themselves whether London will seek a stronger relationship with Washington at the expense of its geographically closer European partners. On the sidelines of the Munich Security Conference, DW's Michaela Küfner asked Britain's defense secretary, Sir Michael Fallon, what effect the Brexit could have on European security.

DW: Sir Michael, you've reiterated that the new UK defense policy will put NATO at its core. How much does talk about NATO, talk about how much it is still a stable structure, damage the alliance itself?

Sir Michael Fallon: The alliance needs to stick together now. The alliance is being tested. It is being tested by Russia; it is being tested by terrorism in the Middle East. There has never been a time when Europe and NATO really needed to stick together more - and Britain is going to be a part of that. We are leading the Very High Readiness Task Force, the response unit of NATO, all this year. We are deploying troops to Estonia. We are deploying RAF aircraft to Romania for southern air policing. We will continue to lead in NATO to help bring that reassurance that the alliance needs.

There was a lot of talk here of strengthening alliances to avoid a fall back into spheres of influence. Now you are about to leave a very strong alliance: the European Union. How much are you becoming a sphere of influence of the United States?

Britain has always been skeptical of EU ambitions to build up its own force. You are hinging your defense even more on NATO, even more on your US partner in the future. How is that going to work? 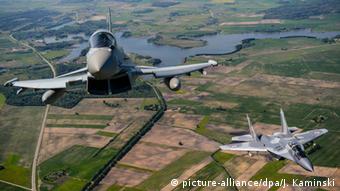 RAF planes are involved in air policing in eastern Europe

The EU will no doubt go ahead without you on that, though. Will you still be a stakeholder in that process at all?

It is not just Britain that has been pointing to the need not to set up new unnecessary structures. When we discussed this in Bratislava in September, many other European countries joined with us in saying that we already have NATO. We don't need an EU army. We don't need EU headquarters. They have different roles. Europe has the political role. It can impose sanctions, for example on Putin. It has the diplomatic clout. But it is NATO that is the military power, and it is very important that we don't have two competing organizations.

The interview was conducted by Michaela Küfner.

You can watch the interview here.