Amber Rudd's resignation comes amid outrage over mistreatment of long-term legal residents from the Caribbean who have wrongly been labelled illegal immigrants. Just hours earlier, Rudd had vowed to stay in her job. 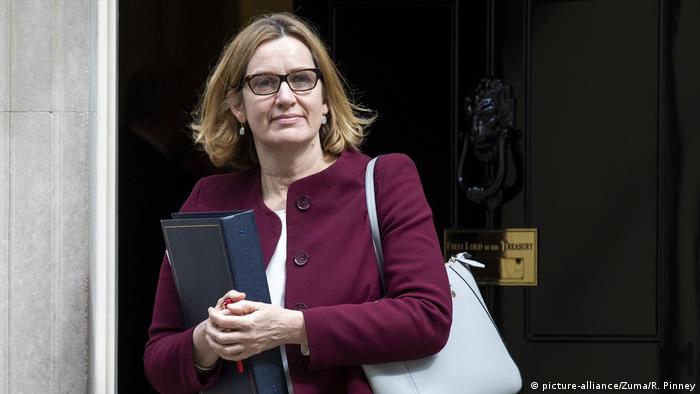 British Home Secretary Amber Rudd resigned on Sunday amid a backlash against Prime Minister Theresa May's government, which has drawn flak for its treatment of long-term Caribbean immigrants who were wrongly classified as illegal immigrants.

The prime minister's office said late Sunday that May had accepted Rudd's resignation.

Over the past several days, the British government has struggled to explain why some descendants of the "Windrush generation," brought to the UK to help it rebuild after the devastation of World War II, had been labelled as illegal immigrants.

The government faced further trouble when the newspaper The Guardian reported that some of the Caribbean immigrants had recently been refused medical care in Britain or threatened with deportation for failing to produce paperwork proving their right to reside in the country.

"This was inevitable; the only surprise is that it took so long," said Shadow Interior Minister Diane Abbott following Rudd's resignation. "The architect of this crisis, Theresa May, must now step forward to give a full and honest account of how this inexcusable situation happened on her watch."

Read more: May's Conservatives in disarray, but still in power

Rudd, who had faced repeated calls from the opposition Labour Party to step down, had been due to make a statement to Parliament on Monday over the scandal.

Both Rudd and May have repeatedly apologized to the "Windrush generation" in the past few days.

"We have let you down and I am deeply sorry," May said on Thursday in a letter to The Voice, Britain's national Afro-Caribbean newspaper. "But apologies alone are not good enough. We must urgently right this historic wrong."

Rudd's position worsened after she told lawmakers last week that the government did not have targets for deporting people — only for a letter from her to May to emerge in which she stated an "ambitious but deliverable" aim for an increase in the enforced deportation of immigrants.

In her resignation letter to the prime minister, Rudd said she had mistakenly misled parliament.

"I feel it is necessary to do so [resign] because I inadvertently misled the Home Affairs Select Committee over targets for removal of illegal immigrants," Rudd wrote to May. "I should have been aware of this, and I take full responsibility for the fact that I was not."

Rudd had resisted calls to resign and tweeted Friday: "I will work to ensure that our immigration policy is fair and humane."

Rudd's resignation is a blow to May as she navigates the final year of negotiations ahead of Britain's exit from the European Union in March 2019.

Rudd, 54, one of the most pro-EU senior ministers in May's Cabinet, was appointed home secretary in July 2016.

Home Secretary Amber Rudd condemned encryption just days after a London terrorist attack, before which the offender reportedly used Whatsapp. She published a long commentary on the issue, as well as a BBC interview. (26.03.2017)