Britain's Presidents Club charity has shut down following allegations of sexual harassment at a men-only gala. Foreign Secretary Boris Johnson and the Bank of England were among those forced to clarify their involvement. 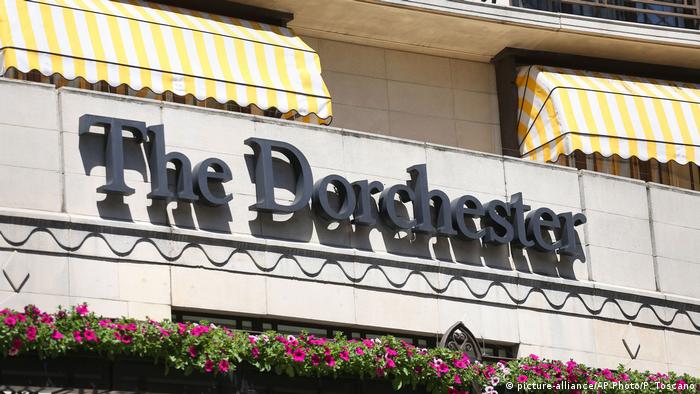 Britain's business and political world was rocked by allegations of sexual harassment on Wednesday, after an investigation by the British business daily Financial Times (FT) reported that female hostesses were groped and propositioned at a men-only charity gala.

Around 360 businessmen and politicians attended the latest annual dinner and auction organized by the Presidents Club charity fund at London's luxury Dorchester Hotel. The event also featured more than 100 young female hostesses, who were required to wear short skirts and high heels. Among them were two undercover journalists, who later reported dozens of instances of harassment, lewd comments and "repeated requests to join diners in bedrooms elsewhere in the Dorchester."

"I was groped several times and I know that there are numerous other hostesses who said the same thing had happened to them," FT reporter Madison Marriage said. "The worst I was told by one of the hostesses was a man taking his penis out during the course of the dinner," she added.

Following the publication of the investigative report, the Presidents Club announced it was shutting down and that all remaining funds would be distributed to children's charities. The trust claimed to have raised some 20 million pounds ($28 million, €23 million) since it was founded in the 1980s.

A number of institutions that had previously received donations from the trust, including London's Great Ormond Street Children's Hospital and London's Royal Academy of Music, said they would be returning all funds handed to them in recent years.

British Prime Minister Theresa May on Thursday said that she was "appalled" by details in the report.

"I thought that that sort of attitude of the objectification of women was something that was in the past, that we had managed to overcome," May said, speaking on the sidelines of the World Economic Forum in Davos, Switzerland. "Sadly, what that event showed is that there is still a lot more work for us to do."

Political figures scramble to distance themselves from gala

A number of political figures were forced to issue statements distancing themselves from the charity gala, including UK Foreign Secretary Boris Johnson and Bank of England Governor Mark Carney.

Among the auction prizes at the event was a personal lunch with Johnson and tea with Carney.

A spokesperson for May said that Johnson "had not agreed to support this event and knew nothing of the inclusion of any lunch."

The Bank of England released a statement saying that Carney was "deeply dismayed that such an event could take place" and that a tour of the central bank had been donated at a separate event and reauctioned for the Presidents Club's gala without permission.

A member of May's cabinet, Children and Families Minister Nadhim Zahawi, came under fire for attending the dinner. May's spokesman said that he "has himself said that he felt uncomfortable at it, leaving at the point that the hostesses were introduced."

Zahawi later added on Twitter that he "unequivocally condemns this behavior" and will "never attend a men-only function ever again."

The ramifications of the event were felt by some in Westminster, however. Businessman David Meller was forced step down from his position on the board of the Department for Education for his role as a joint trustee of the Presidents Club.

His resignation was welcomed by several female politicians on Wednesday. Labour Party lawmaker Jess Phillips, who brought the issue before the House of Commons, said: "What happened is that women were bought as bait for men who were rich men, not a mile from where we stand, as if that is an acceptable behavior. It is totally unacceptable."

"It is quite extraordinary to me that in the 21st century allegations of this kind are emerging," junior education minister Anne Milton told the house. "Women have the right to feel safe wherever they work and allegations of this type of behavior are completely unacceptable."

Yates Lu said she started the petition after discovering that the Presidents Club had no legal responsibility for the widespread harassment its female staff were subjected to.

The petition calls on UK Home Secretary Amber Rudd to restore a legal provision protecting women from sexual harassment by customers and clients, in addition to employers and colleagues.

"Like these women, I too have faced unwanted remarks and sexual advances in the workplace," Yates Lu wrote. "Like so many other women, I did not report the incident to my employer because I feared that it would not lead to any consequences, and would only damage my position at work."